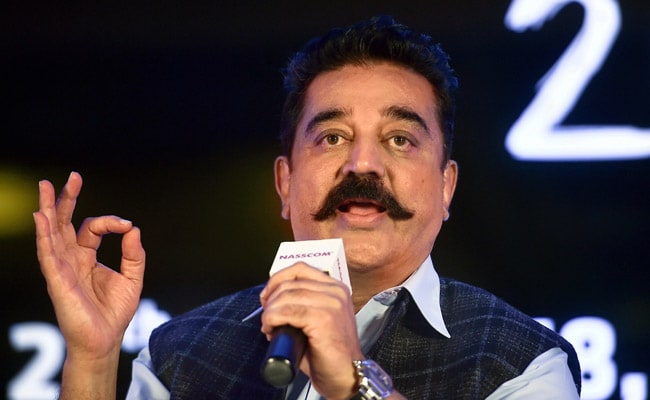 At an event in Chennai, Kamal Haasan recalled an anecdote from Mahatma Gandhi's life.

Actor-turned-politician Kamal Haasan, who had sparked a row over his "India's first extremist a Hindu" remark for Mahatma Gandhi's assassin Nathuram Godse, today spoke about the 'Father of The Nation', calling him a ''superstar''. He added he cannot accept a "villian as a hero".

At an event in Chennai, Mr Haasan recalled an anecdote from Mahatma Gandhi's life, where he lost his slipper while travelling on a train. "Mahatma Gandhi is a superstar. While waving at the crowds from a train, he once lost his slipper. He also threw the other one away and reasoned that the pair could prove to be of use to someone," he said he at an event for a film titled 'Ottha Seruppu,' which translates to single chappal.

He added that he came across this little anecdote while researching for his film 'Hey Ram',  He came to know that his spectacles and a slipper "went missing during the melee," apparently referring to his assassination.

Mr Haasan said he was moved by the story and used it as inspiration for a scene in his film. "I created a scene where the lead character, played by me, takes slipper and keeps it with him till his death."

"I cannot change my hero and I can't accept the villain as hero," he said, without mentioning who he was referring to Mahatma Gandhi or Nathuram Godse.

"I am not saying this because this is a Muslim-dominated area, but I am saying this before a statue of Gandhi. Free India's first extremist was a Hindu, his name is Nathuram Godse. There it (extremism) starts," he had said in Tami8l Nadu's Aravakurichi.

His remarks had sparked a major row. The BJP and AIADMK criticized him sharply and cases were filed against him in Tamil Nadu and Delhi.