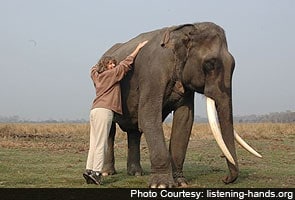 Kaziranga: Joyraj, the elephant famous for his role in anti-poaching operations, rescue during floods and animal census besides ferrying tourists in the Kaziranga National Park, has become ill due to old-age ailments.

Retired from service with the Assam Forest Department five years back, the 72-year-old tusker is fully dependent on medicines and food provided by the KNP authorities as he is unable to gather his own food and water from the forest.

Having served the KNP for the major part of his life, the majestic jumbo is now being taken care of by the KNP authorities.

Apart from these, Joyraj was the troop leader during the procession of the first and second Kaziranga Elephant Festival held at KNP.

Joyraj had been chosen for his towering height over other pachyderms, strength and his huge pair of five feet long tusks, the sources said.

Mohal Karmakar, a mahout from Joyraj's home range Kohora in the Park, said he can never forget the elephant's personality, his majestic way of walking, his body language, behaviour and his alertness when carrying children and the way he flaps his ears to show he is happy.