Mr Singh, 82, died after a cardiac arrest at Delhi's Army Hospital (Research & Referral), where he had been admitted in June 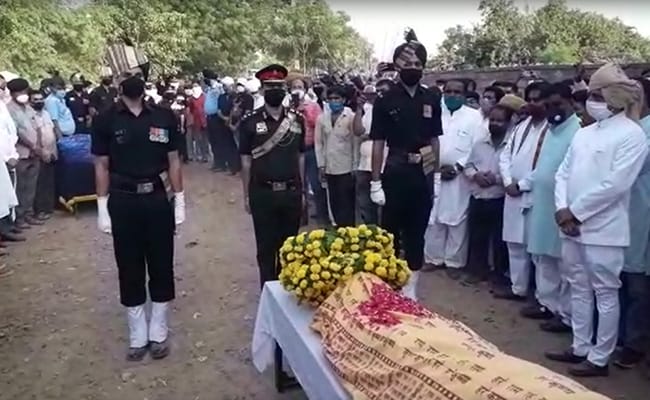 Former Union Minister Jaswant Singh, who died in Delhi on Sunday morning, was cremated at his farm house in Rajasthan's Jodhpur in the evening. Mr Singh, 82, died after a cardiac arrest at Delhi's Army Hospital (Research & Referral), where he had been admitted in June.

Dozens of family members and close friends - wearing face masks and maintaining social distance amid the Covid pandemic - gathered to pay their last respects as Mr Singh's son, Manvendra Singh, lit the funeral pyre while Vedic mantras were being chanted.

A wreath was also laid on behalf of the Indian Army.

A close aide of former Prime Minister Atal Bihari Vajpayee, Jaswant Singh had a long and distinguished political career, serving as India's Foreign, Defence and Finance ministers. He was also one of the country's longest-serving parliamentarians.

Mr Singh, who studied at Mayo College in Ajmer, was also a officer in the Army in the 1950s and 60s; he resigned to pursue a career in politics.

Prime Minister Narendra Modi has expressed his shock at Mr Singh's death and said he had "served our nation diligently first as a soldier and later during his long association with politics".

"Jaswant Singhjii served our nation diligently, first as a soldier and later during his long association with politics. During Atalji's government, he handled crucial portfolios and left a strong mark in the worlds of finance, defence and external affairs. Saddened by his demise," the tweet read.

Jaswant Singh Ji will be remembered for his unique perspective on matters of politics and society. He also contributed to the strengthening of the BJP. I will always remember our interactions. Condolences to his family and supporters. Om Shanti.

Mr Singh, who quit his appointment to the Central India Horse - an armoured regiment - contested his first election as an independent candidate from Osian - close to his home town of Jasol.

His political career took off after he entered national politics in the 1980s, winning four Lok Sabha polls and becoming a five-term Rajya Sabha MP. The turning point came when he met Atal Bihari Vayjpayee in the 1970s. Their friendship lasted a lifetime.

Both shared a taste for things literary and those close to Mr Singh recalled how the two spent evenings sharing common interests - politics, prose and foreign affairs. Jaswant Singh's son Manvendra had recalled in an article how his father was often called "Atalji's Hanuman".

"Deeply pained by the passing away of veteran BJP leader & former Minister, Shri Jaswant Singhji. He served the nation in several capacities including the charge of Raksha Mantri. He distinguished himself as an effective Minister and Parliamentarian," Rajnath Singh tweeted.