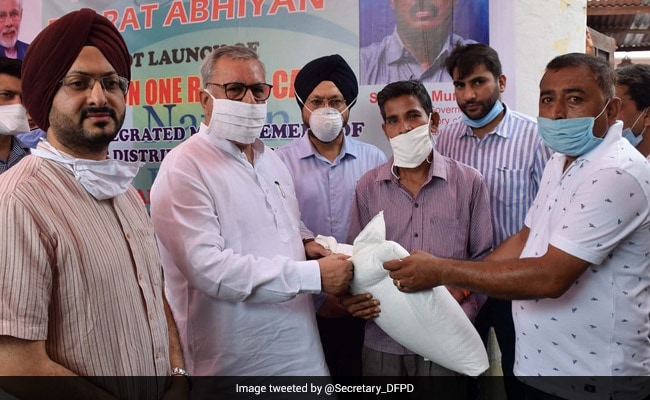 The scheme was announced last year by the government of India.

Jammu and Kashmir administration on Tuesday launched the ''One Nation One Ration Card'' scheme at two fair shops on a pilot basis, a spokesperson said.

Mr Khan said under ''One Nation One Ration Card'' initiative, eligible beneficiaries from any state and union territory would be able to get their entitled food grains under the National Food Security Act (NFSA) from any fair price shop in the country with interstate portability.

The scheme was announced last year by the government of India, but it has recently gained momentum on account of migration during the COVID-19 lockdown, the official spokesperson said.

The system will enable any individual or migrant worker and their family member to access the Public Distribution System (PDS) from any fair price shop in the country, Mr Khan said.

During the inaugural function at a fair price shop, Mr Khan distributed ration among two beneficiaries from Madhya Pradesh and Uttar Pradesh who were already registered with the NFSA in their home states, the spokesperson said.

These two beneficiaries also became first non-native beneficiaries of Jammu and Kashmir to receive ration under this initiative, he said.

The identified beneficiaries were authenticated through their Aadhar numbers, the spokesperson said.

The migrant labourers would hugely benefit from this scheme as they can purchase their allotted rations from fair price shops on subsidized rates, Mr Khan said. After implementation of this scheme there will only be one type of ration card across the entire country and adequate food grains would be provided to poor sections at subsidized rates, he added.

The Department of Food and Civil supplies plans to roll out the scheme in a phased manner by end of August this year, the spokesperson said.

One Nation One Ration CardJammu