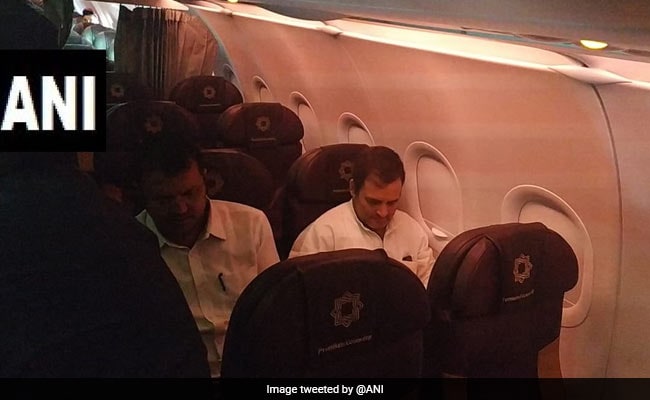 Rahul Gandhi is on his way to Srinagar along with a team of other opposition leaders.

Congress leader Rahul Gandhi along with other opposition leaders is on his way to Jammu and Kashmir, where restrictions have been imposed since the centre withdrew special status from the state and divided it into two union territories earlier this month.

After the Jammu And Kashmir Information and Public Relations Department tweeted last night that the political leaders should not "not visit Srinagar as they would be putting other people to inconvenience", Congress's Ghulam Nabi Azad accused the government of giving contradictory statements.

"Government says the situation in Jammu and Kashmir is normal. Then, they do not allow leaders to visit the state.... haven't seen such contradiction. Why are Omar Abdhullah, Mehbooba Mufti, and Farooq Abdullah are under house arrest? Why arent they allowing me to go to my home? If it's normal, why arent we allowed?" Mr Azad asked as he left from Delhi this morning.

Some 400 politicians, including former Chief Ministers Omar Abdullah and Mehbooba Mufti, are under arrest in J&K. Restrictions are still in place at several areas in the state.

Here are the live updates of the visit of opposition delegation to Jammu and Kashmir.

Aug 24, 2019 15:33 (IST)
The opposition leaders were sent back from Srinagar airport. The development came as  senior BJP leader died in Delhi at 66,
Aug 24, 2019 12:29 (IST)
How Many Times Has Rahul Gandhi Visited J&K? Asks BJP's Nirmal Singh
"Today people are coming to politicize the issue of Jammu and Kashmir  for their benefit. They going there to just be a news item. I would like to as Rahul ji that how many times did they visit Jammu and Kashmir": BJP's Nirmal Singh
Aug 24, 2019 12:00 (IST)
All We Want Is Dialogue With People From Jammu and Kashmir: RJD's Manoj Jha
"Either they should stop saying that the situation in Jammu & Kashmir is normal, people are happy and there is a peaceful situation or they should accept the current situation. All we want to do is to meet political leaders from our ministry, to have a dialogue with the citizens Of Jammu & Kashmir": RJD Leader Manoj Jha
Aug 24, 2019 11:56 (IST)
Our Motive Is Not To Create Disturbance: NCP's Majeed Memon
NCP leader Majeed Memon who is part of Opposition delegation which will visit Jammu and Kashmir on Saturday, said their motive is not to go and create disturbances but to find out ground realities and issues being faced by people in the valley.
"Our motive is not to go and create disturbance. We are not going as government''s opposition, we are going in government''s support so that we too can give suggestions as about things that can be done," he said while talking to news agency ANI.
Aug 24, 2019 11:54 (IST)
Why Are They Not Allowing Me To Go Home? Asks Congress Leader Ghulam Nabi Azad
"On one hand government says situation is normal, and on the other hand they don't allow anyone to go. Never seen such contradictions. If things normal then why political leaders are under house arrest?," Ghulam Nabi Azad said this morning. Read here