LIC's first-day performance makes for the second-worst debut among 11 global companies that listed this year after raising at least $1 billion through first-time share sales. 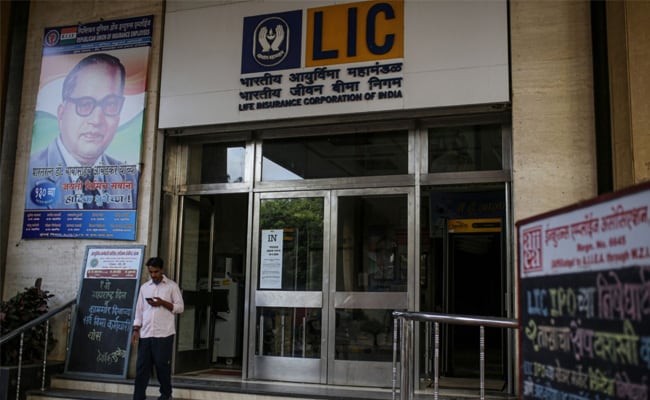 LIC's weak debut came even as stocks in India and the broader Asian market rallied on Tuesday.

State-run insurer Life Insurance Corporation of India slumped in its Mumbai trading debut after a record initial public offering that priced at the top of the range and was oversubscribed nearly three times.

The shares ended 7.8% lower than the IPO price of Rs 949 after losing 9.4% earlier. The offering raised $2.7 billion, with buyers including sovereign funds in Norway and Singapore, and millions of small-time Indian investors.

LIC's first-day performance makes for the second-worst debut among 11 global companies that listed this year after raising at least $1 billion through first-time share sales. The weak debut came even as stocks in India and the broader Asian market rallied on Tuesday.

The sale of equity in the 65-year-old behemoth, which is synonymous with insurance in India, was oversubscribed nearly three times, riding on the enthusiasm of policyholders who got a 60-rupee discount and bid multiple times for the shares on offer. At the closing price of Rs 875.25, the stock is now below the discounted price.

"The positives around the company are centered around a single point -- the size. It is the largest insurer with the largest market size and the largest network of agents," said Nirav Karkera, head of research at Fisdom, a Mumbai-based investment advisory firm, before the stock started trading. "All said and done, LIC will receive its due. But it will not be an easy journey. Once you are under the glare of the investors, LIC will have to start focusing a lot more on growth of its business."

The poor listing is set to disappoint millions of small-time investors who bid enthusiastically for the issue because of their long and emotional association with the insurer and its products.

Prime Minister Narendra Modi's government decided to push ahead with the IPO despite a slowdown in global fundraising as the war in Ukraine and rising interest rates stoked volatility and sapped investor appetite for equities. Funds from the IPO are critical to bolstering government finances and meeting a budget deficit goal.

LIC's is the fourth-largest deal among global IPOs priced this year. It comes when there is a dearth of large-size offerings in financial hubs from New York to London and Hong Kong. There hasn't been any listing exceeding $1 billion in Hong Kong or Europe so far this year. 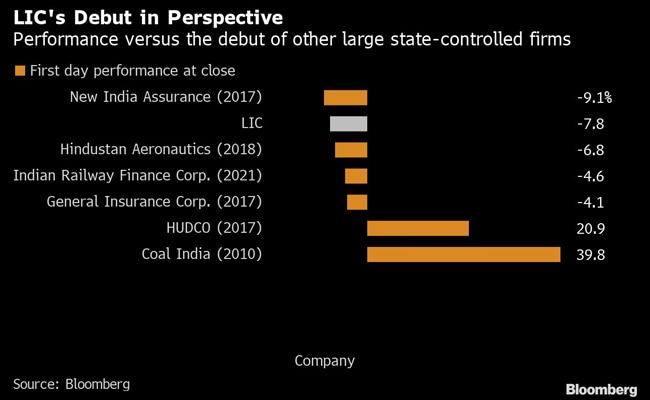 The S&P BSE IPO Index, a gauge tracking the performance of Indian shares for the first two years after listing, has fallen 23% so far in 2022 after nearly tripling in the previous three years.

The weak start also brings back memories of market debuts by a number of large public-sector companies that fell below issue price on listing. New India Assurance Co., listed in November 2017, finished its first session 9% below the listing price. In fact, of the 21 state-run firms that have debuted since 2010, half are still trading below their respective IPO price.

Macquarie Capital Securities (India) Pvt. started coverage of LIC's stock with a neutral rating and a price target of 1,000 rupees.

"The call here is whether LIC will be able to diversify the product mix in favor of high margin non-par products," analysts led by Suresh Ganapathy wrote in a report Tuesday, noting that the insurer has lost market share in individual business over the past several years due to lack of a "diversified product portfolio and excessive focus on single premium and group business."