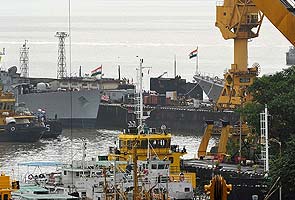 Moscow: The Russian firm that refitted the submarine INS Sindhurakshak which exploded and sank in a Mumbai dock with 18 sailors on board said on Wednesday the craft had been fully operational when returned to India in January.

A spokesman for the Russian Zvyozdochka ship repair company told RIA Novosti that "certain concerns" were raised when the Russian-made INS Sindhurakshak was inspected by experts at the Severonisk port on the Barents Sea.

But he said India raised no objections about the state of the diesel-powered vessel when it was received from Russia.

"We signed a contract for a light overhaul and modernisation in June 2010, and completed (the refit) in January 2013," the unidentified Zvyozdochka spokesman told RIA Novosti.

"During the repairs, we fitted a new Club rocket complex and a number of foreign systems on the ship, including Indian ones."

The spokesman said these included updates to the submarine's navigation and communication systems as well as an overhaul of its power generator.

The INS Sindhurakshak is still covered by a Russian warranty and eight Zvyozdochka employees were currently in the Mumbai port where the vessel exploded on Wednesday early morning.

Promoted
Listen to the latest songs, only on JioSaavn.com
"We still have no information about what really happened there," the Zvyozdochka spokesman said.