At its 20th meeting held in Delhi on Saturday, the GoM on COVID-19 was briefed on the current status of the coronavirus outbreak in India, the health ministry said. 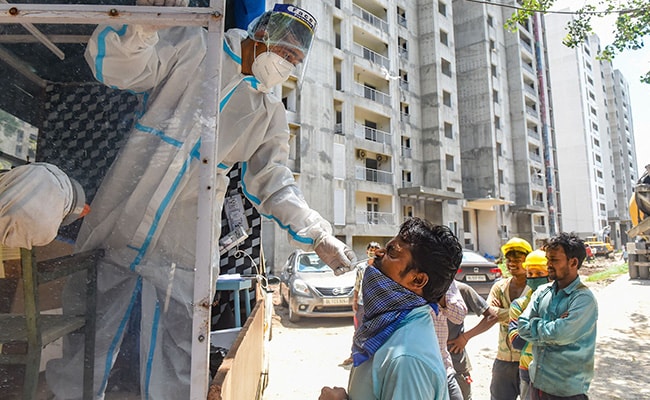 For every million population, India's coronavirus cases and fatalities are one of the lowest compared to the global averages, the high-level Group of Ministers (GoM) on COVID-19 was informed on Saturday.

At its 20th meeting held in Delhi on Saturday, the GoM on COVID-19 was briefed on the current status of the coronavirus outbreak in India, the health ministry said.

The meeting was informed that as of Saturday, eight states -- Maharashtra, Karnataka, Andhra Pradesh, Tamil Nadu, Uttar Pradesh, West Bengal, Odisha and Telangana -- contribute around 73 per cent of the active caseload.

At the meeting, Union Health Minister Harsh Vardhan said the country has made tremendous strides in containing the COVID-19 outbreak and instructed his ministry to develop standard operating procedures (SoPs), comprising COVID protocols and preventive measures, for Parliament and Assembly sessions.

The GoM expressed concern about the forthcoming festival season and advised everyone to adopt safe and COVID-appropriate behaviour.

"The global comparison depicted that India has one of the lowest cases per million (2,424) and deaths per million (44) compared to the global average of 3,161 and 107.2 respectively," the ministry said.

It underlined that despite being resource-constrained and densely populated, timely lockdown and rapid augmentation of infrastructure have enabled India to keep cases per million and deaths per cent million considerably low compared to other countries.

According to an official statement, Mr Vardhan expressed satisfaction at the coordinated efforts of the Centre, states and Union Territories.

"In the month since the last meeting of GoM on July 31, we have made tremendous strides in containing the disease. As many as 26.4 lakh have already recovered. The country's case fatality rate is at its lowest at 1.81 per cent and consecutively recovery rate has increased to 76.47 per cent," he said.

He further informed the GOM that with the creation of sufficient health facilities, the health infrastructure in the country has been amply strengthened.

"A total of 1,576 labs at present have led to an upsurge in testing and the goal of 10 lakh tests per day has been fulfilled. More than nine lakh samples were tested in the last 24 hours and this has led to the cumulative number of tests crossing the four-crore mark," he added.

Mr Vardhan also informed the GoM that more than 338 lakh N-95 masks, nearly 135 lakh PPEs and about 27,000 ventilators have been provided by the Centre to the states and UTs.

He mentioned that there is a need for continued attention on promoting the wearing of masks, physical distancing and respiratory etiquettes.

Dr Vinod K Paul, Chairperson of the Empowered Group-1 on Medical Emergency management plan, apprised the GoM of the process of COVID vaccine development in India and around the world.

He stated that 29 vaccine candidates, including two Indian, are in clinical trials. Of them, six are in phase-three of the trial.

In India, Bharat Biotech's vaccine candidate, based on inactivated virus procured by the ICMR, is in the phase-two trial along with that of Zydus Cadila, which is based on viral DNA. The Oxford vaccine candidate being put in trial by the Serum Institute of India is already in phase-three in Maharashtra and some other states.

Dr Paul also informed the GoM of the progress made by the National Expert Group on Vaccine Administration for COVID-19.

The group is tasked with facilitation of vaccine development, including trial and stockpiling, sorting out issues of financing, risk management, selection of potential beneficiaries and their order of reference, envisioning logistics, scale-up, digital system, defining principles for selecting beneficiary categories, and defining the scientific basis for selecting vaccine, the statement said.

Three meetings of this national expert group have been held so far.

Health Secretary Rajesh Bhushan apprised the GOM on the efforts made by the health ministry towards addressing mental health during the pandemic. He stated that the Centre was in direct communication with the states reporting a surge in cases and those with higher mortality rates.