"The cannons are probably of World War I vintage and meant for being mounted on ships," he told PTI. 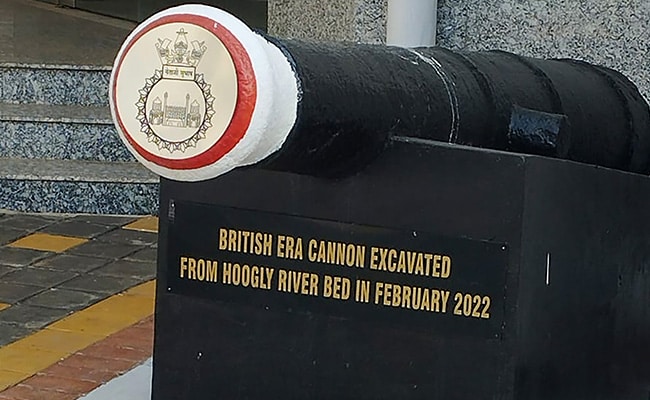 Plans are on to refurbish and mount the other cannons at the Navy's other establishments.

It was not a treasure hunt but Indian Navy personnel did hit upon a jackpot of a different kind while clearing a piece of land on the banks of the Hooghly river.

Five cannons, probably of World War I vintage, were discovered by the Navy from the river bank in Kolkata, a senior official at its Bengal area headquarters said.

Two of these British-era cannons were refurbished and painted in black, white and red motifs, and mounted at the INS Netaji Subhas, the Indian Navy's Bengal area base headquarters here.

Captain Joydeep Chakraborty said that they came across the cannons while clearing a piece of land on the left bank of the Hooghly.

"The cannons are probably of World War I vintage and meant for being mounted on ships," he told PTI.

Four of the five canons, discovered in mid-2021, were retrieved this year from the land, which earlier was part of the river bed.

The last one is in the process of being lifted from the ground where it is embedded, he said.

Captain Chakraborty said that the land at Daighat near Kidderpore docks earlier belonged to the Kolkata Port, and was taken from them by the Navy for the construction of a facility there.

While clearing the land of weed and rubbish, the workers came across a British-era cannon when the spade of one of them made a metallic sound on hitting the ground.

"Upon clearing the place, a cannon was discovered and further search led to the discovery of four more," he said.

Four of the cannons were excavated and brought to the Navy House, with two of these having been mounted there, Commander Sudipto Moitra, the chief spokesperson of the Bengal area, said.

These did not bear any manufacturing marks, making it difficult to trace their origin.

These may have been manufactured here for British warships, Captain Chakraborty said.

Plans are on to refurbish and mount the other cannons at the Navy's other establishments here, Commander Moitra said.