Meter, founded by two brothers, has a new way to get workplaces online as well as some noteworthy backers. 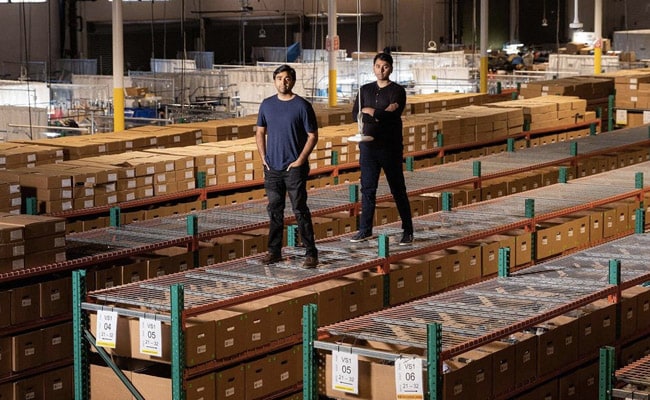 Anil and Sunil Varanasi could have done whatever they wanted. The brothers, born in India, moved to Virginia when they were 12 and 14, respectively, then sped through high school and graduated at 16 and 17. For fun, they hacked into their Xbox to make it do their bidding, and built and sold custom PCs. Once in college at George Mason University, the Varanasis thrived in classes ranging from biochemistry to economics to computer engineering.

They seemed set for a bright future in a buzzy field such as cryptocurrency or smartphone-enabled food delivery.

Instead, the teenagers chose to focus on improving office internet and Wi-Fi networks. While still in college, they started a company to install networking equipment for businesses, and had 50 employees and 100 customers by the time they graduated. That experience convinced them that what really had to be done was a redesign of the entire idea of networking equipment and the software that runs it. "We think internet service should be exactly like electricity and telephones," says Anil, the chief executive officer of Meter Inc., the company that resulted from their insight.

People who've never had to install an office internet network might be surprised to learn it isn't already that simple. Networking generally requires a company to buy its own complicated gear, and then manage that equipment along with a relationship with one or more internet service providers. This situation has persisted even as computing, data storage, and other aspects of digital life have evolved to be sold via the cloud on a rental basis.

Meter offers to charge customers a monthly fee of 15 per square foot of office space. A customer sends a floor plan; Meter determines what gear the office will need-it says it's uniquely equipped to do this because it makes all of its own hardware and software-and sets up the connections through its relationships with internet providers.

This pitch has suggested enough of innovation that the startup has raised $50 million in funding from some of Silicon Valley's biggest names, including Patrick and John Collison (Stripe); Sam Hinkie (87 Capital); Sam Altman (OpenAI); Diane Greene (co-founder of VMware); Egon Durban ( Silver Lake); and Sequoia Capital. Meanwhile, Meter has acquired hundreds of customers in the US, despite operating in relative obscurity.

Because companies generally manage their own office networking, handing control to a startup has sometimes been a tough sell. "I was very skeptical and told them that I couldn't imagine using their service," says the head of security at a business software maker, who requested anonymity because his company sees disclosing details about its technology use as a security concern. When his company tripled its office space, he decided to work with Meter because it seemed like it would be cheaper and less of a hassle. "I would have had to hire someone to install all the stuff and would have been on the hook for running it myself again, which I didn't really have the time or interest in doing."

The deceptively simple idea required a significant technological undertaking. In 2014 the Varanasis sold their first networking company and moved into a single room in a hostel in Shenzhen, China, where they sought manufacturing partners to build the routers and switches they'd need. "We'd spend all day at the factory and sleep on the factory floor, because we wanted to learn everything about the manufacturing process," Sunil says. "I didn't have a bed, because it was covered in circuit boards, so that we could test our software."

When they returned to the US in 2016, the brothers first catered to other startups, which were easier targets than more established companies that had already bought a lot of networking equipment. Over time, Meter managed to attract larger businesses, offering to buy and replace their existing gear to help seal deals. Meter now says it manages "millions of square feet" of space for a variety of companies. But it will likely struggle for some time to persuade larger companies that have already made huge networking investments to buy its service. "I don't think there are any crisis meetings taking place right now at Cisco," says the once-skeptical customer at the business software company.

The widespread pandemic-era reassessment of how offices function should work to Meter's advantage. Because it makes all the upfront investment in equipment and setup, there's less financial risk in hopping from office to office. Real estate companies such as Tishman Speyer have started to team with Meter so tenants who move into a new office can simply say they'd like internet service as part of their contract and have it turned on right away. "The infrastructure really should go with the building," says OpenAI's Altman, who invested in Meter, "and not the customer."