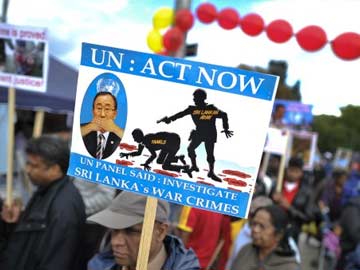 A man holds a sign during a demonstration at the UN's European headquarters in Geneva. (File photo)

Geneva: India has abstained from the vote at the United Nations session in Geneva which calls for an international investigation into alleged war crimes in the final stage of the island's civil war which ended in 2009.

The Indian envoy speaking to the council before the vote said that India felt the resolution showed "an intrusive approach that undermines national sovereignty." Sri Lankan is being accused of failing to implement adequate reconciliation measures and investigate allegations of war crimes after the end of a three-decade civil war.

Speaking to NDTV, the Indian envoy Dilip Sinha said India does not support the operative para 10 OF the resolution which asks for an international inquiry but encourages Sri Lanka to implement the recommendations of an internal inquiry's report and findings.

The resolution adopted today was rejected by Colombo.

The UN resolution, which is the third consecutive one faced by Sri Lanka, is led by the US. The issue of whether and to what extent Tamils in Sri Lanka were persecuted by the Sinhalese majority is an emotive one in Tamil Nadu. Last year, the Prime Minister lost the DMK, a crucial member of his minority government, which said New Delhi had failed to take a strong stand against Sri Lanka. (DMK quits UPA over Sri Lanka)

With the national election due in weeks, the Congress-led government has been evaluating the potential consequences of abstaining from the vote in Geneva.

Promoted
Listen to the latest songs, only on JioSaavn.com
After a quarter-century of fighting, the government crushed the Tamil Tiger rebels who said they faced discrimination from the Sinhalese majority. A UN report found that as many as 40,000 people may have been killed in the final phase of the civil war, but the government disputes that figure.

The Sri Lankan government has stressed that it was "grossly unfair" to investigate only the last phase of the war and constantly called for a comprehensive investigation during the whole three decades of war if an international inquiry was to be conducted.