In Gujarat, A Polling Booth For Just One Voter. Here's Why

The poll body has made several efforts for outreach so that no voter is left out. 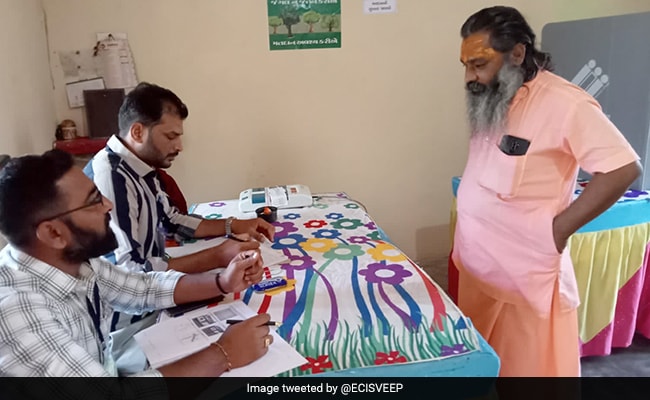 To ensure universal participation in the Gujarat Assembly elections, the Election Commission Of India has set up a polling booth for only one voter, Mahant Haridasji Udasin in Banej in the dense jungles of Gir in the first phase of voting today.

#ECI has set up a polling booth for only one voter, Mahant Haridasji Udasin in Banej (93-Una AC) in the dense jungles of Gir.

Glimpses of Haridas Ji casting his vote during 1st phase of #GujaratElections2022.#novotertobeleftbehind#GujaratAssemblyPolls#ECI#EveryVoteMatterspic.twitter.com/FhDDELyRXU

The poll body has made several efforts for outreach so that no voter is left out. In a series of tweets, the Election Commission posted pictures showing how they are facilitating senior citizen and disabled voters, and reaching areas where access is tricky.

One of the tweets shows voters in Shiyalbet village in Amreli district, which is surrounded by the Arabian Sea, and is reachable only by boat. Five polling stations have been set up on the island, it said.

Another picture shows 104 year voter Ramji Bhai, who voted at the polling station instead of opting for postal ballot.

One of the pictures showed blind voters posing at a polling station in the Surendra Nagar district.

The second phase of the Gujarat Assembly election is on December 5, votes will be counted on December 8.