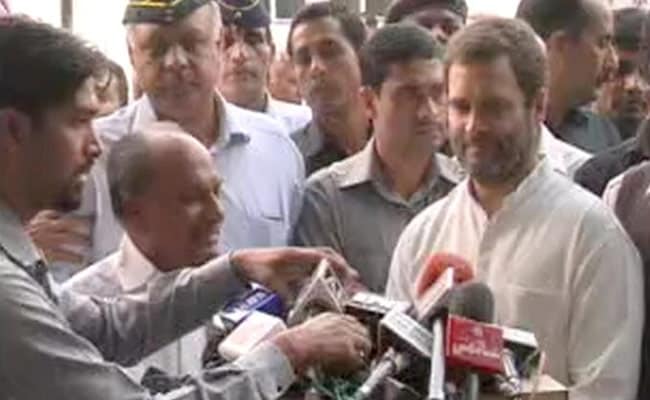 New Delhi: Congress leader Rahul Gandhi today accused the government of habitually betraying soldiers and former servicemen by withholding the higher pensions that they are due under a new scheme cleared last year.

"They have told me that it's not about money, but the respect we owe them," said Mr Gandhi after meeting army veterans.

The One Rank One Pension scheme or OROP returned as a national debate this week after a former soldier from Haryana killed himself after not being paid the money he was due. Subedar Ram Kishen Grewal's death on Tuesday was seized by the opposition to lay into the government for inadequate execution of the scheme that equalizes pensions between former soldiers who served at the same rank for the same amount of time.

In Mr Grewal's case, he was owed an additional Rs 3,000 a month after OROP was approved by Prime Minister Narendra Modi, but the government says the bank authorized to handle his claim erred in its calculation.

Mr Gandhi was detained by the Delhi Police thrice in the last two days as he tried to meet with the family of the Subedar and lead a candlelight march in the heart of the capital. The police says he ignored basic security and law and order concerns. Controversially, the Subedar's relatives were also moved to a police station from the hospital where his body lay with the police accusing them of jeopardizing the health and safety of other patients with their protests against the government.

The dead soldier's son, Jaswant Grewal, has on camera accused the police of assaulting him. "The way a soldier's family was dragged out, abused, beaten - I saw this," Mr Gandhi told reporters today.

Promoted
Listen to the latest songs, only on JioSaavn.com
Yesterday, he was among an array of politicians that reached Subedar Grewal's village to attend his cremation.

Army veterans who have held a sit-in at the heart of Delhi for over a year say the OROP payments that the government is delivering are not enough. They say soldiers who took premature retirement or retired voluntarily from the forces must not be excluded; they also want the rate of payments of current and past pensioners to be reconciled more frequently than five years.