Back From Dead: Navy's Tejas Fighter Preps For Tests On Aircraft Carrier

The two Naval variants of the jet had been parked in a desolate spot in a hangar in Bengaluru, their future bleak, before one of the fighters was taken out for a test flight last week, its first in a year. 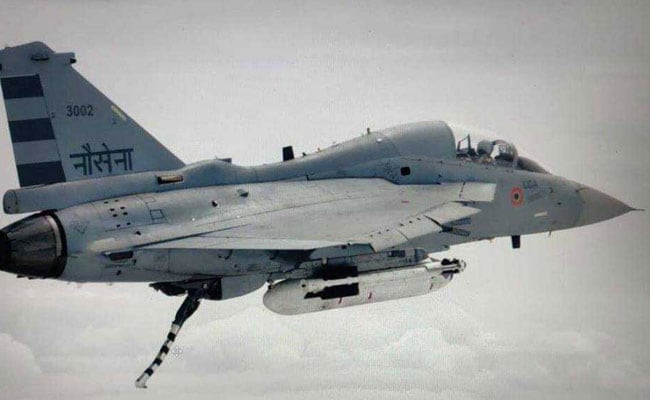 The Tejas-Navy prototypes will begin full-fledged flight-tests off INS Vikramaditya by the end of 2019.

Within the next five months, a made-in-India Tejas fighter jet will touch down briefly on the deck of the Navy's aircraft carrier INS Vikramaditya before taking off again. The series of 'touch-and-go' landings is meant to demonstrate the ability of the fighter to operate safely off the deck of India's only operational aircraft carrier.

If everything goes as planned, two Tejas-Navy prototypes will begin full-fledged flight-tests off Vikramaditya deck by the end of 2019. This will involve landing, refuelling and taking off.

Landing on the deck of the aircraft carrier involves deploying a hook on the fuselage of the jet to snag a wire on the short deck of the ship as the aircraft lands. The hook-wire combination violently slows down the Tejas from its landing speed of 125 knots (approximately 230 kms) to 0 knots in under four seconds.

Today, a Tejas-Navy test pilot, Captain Shivnath Dahiya, successfully tested this system for the first time in Goa. The Tejas fighter touched a speed of approximately 60 knots (111 km) before it was brought to a quick halt.

Over the next few days, the Tejas will conduct more ground tests at speeds first approaching 80-100 knots (148-185 km) before attempting to snag the arrestor wire at its planned landing speed of 125 knots (230 km).  These ground tests will be followed by the jet landing at the Goa test-centre to carry out 'arrested landings' before beginning tests on-board Vikramaditya.

Today's successful test on the Naval Tejas turns the clock back on a programme which seemed almost certainly dead. The two Naval variants of the jet had been parked in a desolate spot in a hangar in Bengaluru, their future bleak, before one of the fighters was taken out for a test flight last week, its first in a year. 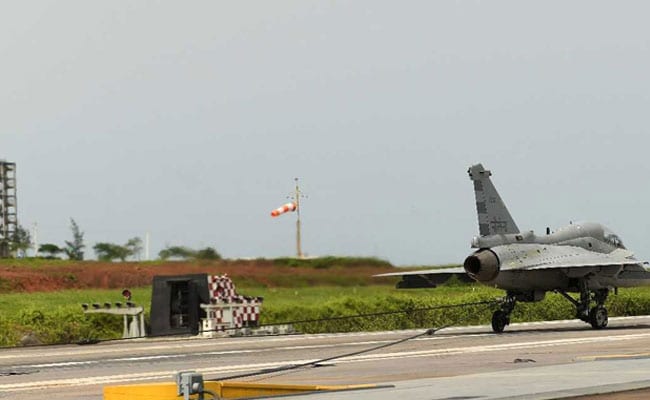 Unlike the Air Force variant of the Tejas, which are now entering squadron service with the Indian Air Force, not many believed that the Naval Tejas would ever land and operate off an aircraft carrier. In December 2016, Naval Chief Admiral Sunil Lanba had said, ''The LCA-Navy in its present form is not up to the mark and does not meet the operational capability required by the Indian Navy." This is why the Navy began the process of looking to buy 57 new fighters to supplement and replace the Russian-built MiG-29Ks that it presently operates.

Those closely involved with the development of the jet, including its designers at the Aeronautical Development Agency (ADA), were determined not to let the project go to seed. Though the Tejas-Navy jet being showcased presently is only a technology demonstrator, a full-fledged Navy fighter, they argued, could never be developed without going through the development process. Eventually, Defence Minister Nirmala Sitharaman, who has strongly backed the Tejas programme, allowed the tests to be re-started giving fresh-life to the once-stalled programme.

The Naval Tejas fighter is significantly different, and in some ways, more advanced than the version of the jet entering service with the Indian Air Force. The Naval Tejas has an altered external structure, strengthened to handle the stresses of landing on-board an aircraft carrier. It has a different undercarriage and additional surfaces on its wings to enable the jet to fly slower as it approaches an aircraft carrier in order to land. The Tejas-Navy comes equipped with significantly modified software which takes into account the oceanic environment the jet is meant to operate in.

As per the Navy's new flight-test regime, the Light Combat Aircraft-Navy is being tested on three key parameters.

The pilots are testing its ability to handle hard landings on the aircraft carrier. The Tejas needs to be able to slow down quickly when it makes an 'arrested landing' on the deck of the Vikramaditya.  And the jet's flight control systems also need to be tested to deal with wind conditions as the fighter approaches the carrier to land.

What's clear, however, is that there is a long way for this Tejas-Navy Technology Demonstrator to pave the way for a fully operational Tejas fighter deployed on an Indian aircraft carrier, a process that could take upto a decade. In its present test-configuration, it isn't powerful enough to carry an ideal number of weapons such as missiles and bombs. To address this, the Aeronautical Development Agency will need to build a larger aircraft with a more powerful engine.The design parameters of that new variant of the Tejas jet can only be locked-down and finalised once the technology demonstrator flying today finishes its final tests.