Deepak Pauskar and another Maharahstrawadi Gomantak Party (MGP) MLA, Manohar Ajgaonkar, quit the regional party and joined the BJP in the early hours of Wednesday. 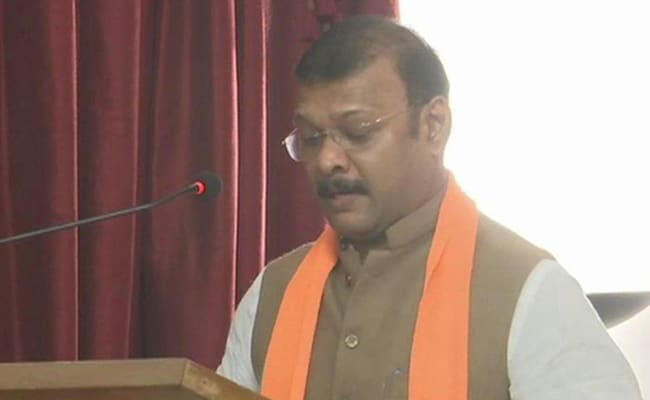 Hours after quitting the MGP and joining the BJP in Goa, legislator Deepak Pauskar was formally inducted into the state Cabinet Wednesday night.

Mr Pauskar and another Maharahstrawadi Gomantak Party (MGP) MLA, Manohar Ajgaonkar, quit the regional party and joined the BJP in the early hours of Wednesday.

Legislators and members of BJP ally Goa Forward Party, two other Independent MLAs, who support the Sawant government, and a majority of BJP ministers did not attend the ceremony.

After splitting from the parent party, the two MLAs formed their own legislature wing and merged it with the BJP. The MGP is now left with only one MLA -- Sudin Dhavalikar.

Goa Governor Mridula Sinha administered the oath of office and secrecy to Mr Pauskar at a ceremony held at Raj Bhavan here at around 11.35 pm.

Talking to reporters after the swearing-in ceremony, Chief Minister Pramod Sawant said he will allot portfolio to Mr Pauskar Thursday.

Mr Dhavalikar's portfolios of transport and public works will now be looked after by Chief Minister Sawant.

Mr Pauskar was inducted into the Cabinet after Pramod Sawant dropped Deputy Chief Minister and MGP MLA Sudin Dhavalikar from his team earlier in the day.