Her Family Was Killed In 1984. Today, She Faced Sajjan Kumar In Court

Cham Kaur, who is a key witness for the prosecution, had identified Sajjan Kumar, 73, as an accused in the 1984 anti-Sikh riots case.

Cham Kaur's son and father were killed in the 1984 anti-Sikh riots.

Cham Kaur, whose son and father were killed by a mob during the anti-Sikh riots 34 years ago, returned home from a Delhi court disappointed.

She left without recording her testimony as the lawyer of the main accused, ex-Congress leader Sajjjan Kumar, did not turn up before the Patiala House court judge. The case was thus, adjourned to January.

However, in the courtroom, Ms Kaur came face to face with Kumar who she says instigated a mob.

Ms Kaur, who is a key witness for the prosecution, had identified Sajjan Kumar, 73, as an accused in the riots. She had said before the court that she saw Kumar, who was a parliamentarian then, telling a mob in Sultanpuri that Sikhs had killed "our mother".

"On October 31, 1984 we were watching the TV coverage of the death of Indira Gandhi. On November 1, 1984 when I stepped out to look for my goat, I saw accused Sajjan Kumar addressing the crowd and was saying 'hamari ma maar di, Sardaro ko maar do' (Sikhs killed our mother, kill them)," Ms Kaur had told the court on November 16.

Ms Kaur said two members of her family were killed in a mob attack the next morning. "My son, Kapoor Singh, and my father, Sardarji Singh, were pulled out of their hiding place on the second floor, beaten badly and thrown off the roof," she said, adding that she was also injured in the incident. 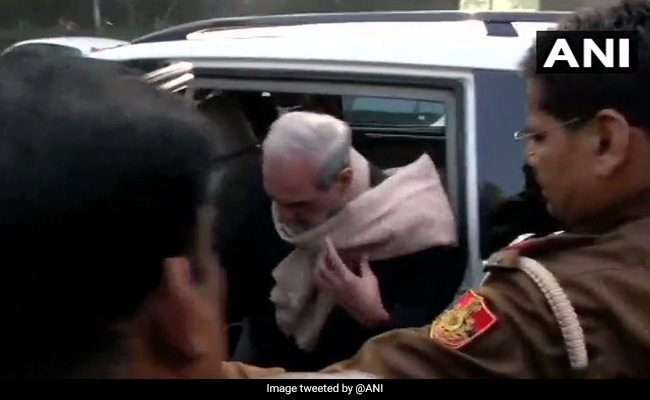 Sajjan Kumar, who was convicted by the Delhi High Court and sentenced to life in jail on Monday in a separate case over the killing of five members of a family during the 1984 anti-Sikh riots, sought time till January 31 to surrender.

At least 3,000 people were killed when mobs led by Congress leaders targeted Sikhs after the assassination of then prime minister Indira Gandhi by her Sikh bodyguards.

Over the years, Ms Kaur has had to make multiple times court visits. The case was transferred from the Karkardooma court to the Patiala House court. "The case keeps getting adjourned... I come here (to the court) whenever I am called," Ms Kaur told NDTV.

Another witness, Sheela Kaur, had earlier identified Sajjan Kumar as an accused in the case.