The BSP leader questioned how the District Magistrate can carry an impartial probe when the family of the victim has accused him of trying to intimidate them. 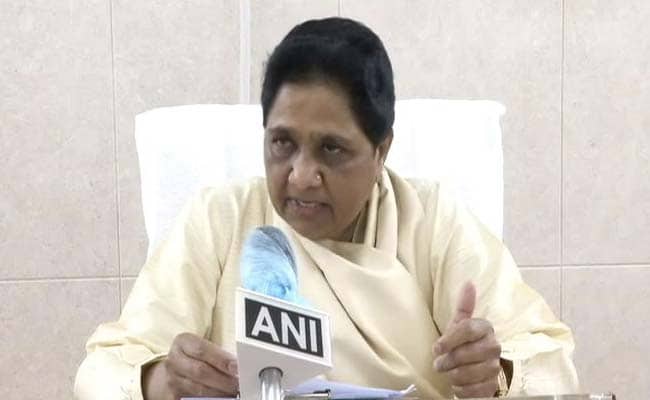 The "silence" of the state government is "sad and very worrying", Mayawati said. (File)

Bahujan Samaj Party chief Mayawati today attacked the Uttar Pradesh government for not taking action against Hathras District Magistrate despite serious allegations of "threats and pressure" levelled against the official by the family of the 20-year-old woman who was allegedly gang raped in the village. The "silence" of the state government is "sad and very worrying", she said.

The woman died on Tuesday after fighting for her life for two weeks. She had suffered severe injuries after being assaulted by four upper caste men from her village in Hathras on September 14.

The BSP leader questioned how the District Magistrate can carry an impartial probe when the family of the victim has accused him of trying to intimidate them.

"There have been serious allegations of the Hathras DM threatening the family of the victim. Despite this, the UP Government is maintaining silence, which is sad and extremely worrying. The government has agreed for a CBI probe but with the DM staying there (Hathras), how can the matter be impartially probed? People are feeling apprehensive," she tweeted in Hindi.

An alleged video of Hathras District Magistrate (DM) Praveen Kumar Laxkar threatening the family during a visit on Thursday has been widely shared since it emerged online. "Do not finish your credibility. These media people... some left today and tomorrow more will leave. Only we will be here with you. Ok? It is up to you whether you want to change your statement or not. We can also change," Mr Laxkar is heard saying in the video filmed on a mobile phone.

In another video in circulation, a woman, believed to be the victim's sister-in-law, is seen accusing the official of trying to change statements of the family members. "They are putting pressure on us. They are saying that if our daughter had died of coronavirus then she would have received compensation. They are saying the case will be rafaa-dafaa (disposed of). We are getting warnings. Our father is getting warnings," she says.

"They are threatening us with videos of (the victim's) mother. At that time she was speaking whatever came to her mind... They will not let us live here. The DM is very cunning, he is trying to trick us. They are pressuring us. They are forcing us and saying our statements are not reliable, we keep changing our statements and we have no credibility."

The official, however, has denied the family's allegation. "I deny the negative rumours about my interactions with them. Their main worry is that the accused must be hanged. I tried to reassure them and told them that the matter would be tried in a fast track court," Mr Laxkar said.

The Uttar Pradesh government has been under intense attack over its handling of the case - which also saw late-night cremation of the victim allegedly without family's consent and barring media and politicians from meeting the victim's family -- which has led to massive protests across the country. On Saturday, Congress leaders Rahul Gandhi and Priyanka Gandhi Vadra was allowed to met the family members in their second attempt.

"No power on earth can stop the voice of this family," said Rahul Gandhi after the meeting and declared that he would fight for ensuring justice to them.

Later in the evening, the Yogi Adityanath government announced that the alleged rape and murder will be investigated by the CBI.