Gurpurab 2019: Punjab Chief Minister Amarinder Singh will lead the jatha to Gurdwara Darbar Sahib and it will return the same day after paying obeisance at the historic shrine, where Guru Nanak Dev is believed to have spent his last days, state government sources said. 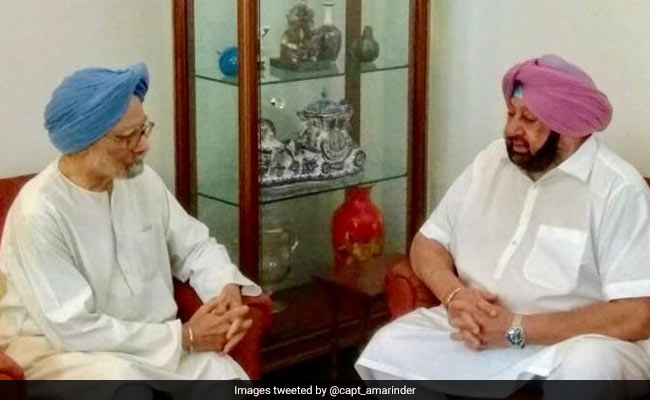 Gurpurab 2019: Manmohan Singh and Amarinder Singh will be in the first jatha to Gurdwara Darbar Sahib

Former Prime Minister Manmohan Singh, Punjab Chief Minister Amarinder Singh and Union minister Hardeep Puri are among the 575 people who will be part of the inaugural jatha (group of Sikhs) to Gurudwara Darbar Sahib in Pakistan through the Kartarpur corridor, central government sources said on Tuesday.

India on Tuesday shared with Pakistan the list of 575 people. Union minister Harsimrat Kaur Badal and MPs and MLAs from Punjab will also be part of the group, the sources said.

It is learnt that Pakistan has denied permission for a composite delegation led by the Punjab government, along with representatives of SGPC (Shiromani Gurdwara Parbandhak Committee) and DSGMC (Delhi Sikh Gurdwara Management Committee) to organise "akhand path" (recital of holy scripture) and hold "nagar kirtan" (religious procession) at Nankana Sahib.

Visas for a 31-member delegation of the Punjab government and 450 Indian pilgrims were not granted despite it having been recommended by the Government of India to the Pakistan High Commission, it is learnt.

It is also learnt that Pakistan has instead chosen to decide on its own to give leadership of the pilgrim group to Paramjit Singh Sarna.

Pakistan is also yet to respond to the proposal made by India to enhance the number of pilgrims visiting on the occasion of 'Gurpurb' on November 12, under the 1974 Protocol, to 10,000 instead of the regular 3,000.

Pakistan is building the Kartarpur corridor from the Indian border in Dera Baba Nanak sector of Gurdaspur to Gurdwara Darbar Sahib in Pakistan.

Punjab Chief Minister Amarinder Singh will lead the jatha to Gurdwara Darbar Sahib and it will return the same day after paying obeisance at the historic shrine, where Guru Nanak Dev is believed to have spent his last days, state government sources said.

The jatha members include politicians of all parties, leaders of the Sant Samaj, eminent people, NRIs and journalists. All 117 MLAs and 13 MPs from Punjab will be part of the delegation.

India and Pakistan have already signed an agreement for pilgrims to visit the historic gurdwara.