BJP sources said Yogi Adityanath is the party's best bet to consolidate the Hindu vote not only because of his hardline Hindutva image, fiery speeches often labelled "polarising" by rival parties and frequent promise that a Ram temple will be built in Ayodhya, but also because the 45-year-old has an appeal across castes. 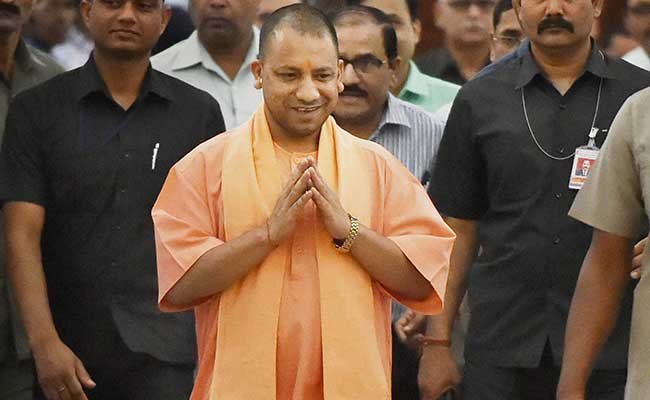 In the last 3 days, the BJP deployed Yogi Adityanath in areas like Saurashtra, Surat and Porbandar

Porbandar: Uttar Pradesh Chief Minister Yogi Adityanath has wrapped up a strategically planned three-day campaign in Gujarat and will be back next week for another stint before the state begins voting. At his last rally in Porbandar the BJP's star campaigner got emotional while remembering Mahatma Gandhi.

In the last three days, the BJP deployed Yogi Adityanath in areas like Saurashtra and in Surat and the coastal Porbandar which have a large number of immigrants, people who have come to Gujarat from other states and now vote here.

Yogi Adityanath addressed four rallies in and around Surat, a diamond and textile hub filled with non-Gujarati-speaking migrant workers mainly from his state Uttar Pradesh and from neighbouring Bihar, Madhya Pradesh and Rajasthan.

The saffron-robed priest-politician, the BJP's most visible Hindutva face, has also pitched for the Hindu vote, campaigning largely in areas that the BJP has dominated in the elections for many years, but feels the need this time to consolidate its position with voters, many of them traders who are upset over the roll-out of the new national tax GST hurting business and Patels, who have demanded reservation in government jobs and colleges and whose young leader Hardik Patil is making vote appeals for the Congress.

At a rally in Limbayat in Surat, Yogi Adityanath attacked the Congress for "degrading" Sardar Vallabhai Patel, comparing the leader to Lord Ram for uniting the country. The Congress had protested at Sardar Patel's proposal to restore Gujarat's famous Somnath temple, said the UP chief minister, who also criticised Rahul Gandhi's visit to the Somnath temple yesterday, before the Congress vice president set out to campaign in Saurashtra. At one rally, Yogi Adityanath alleged that Mr Gandhi sat in Varanasi's "Kashi Vishwanath temple like he was offering namaz."

He also took on Rahul Gandhi in other speeches on the issue of development, saying, "Development that has happened in Gujarat is just because of the BJP... Rahul Gandhi and the Congress must understand it." He congratulated the people of Gujarat for not letting the Congress win a single seat in the state in the 2014 Lok Sabha elections and urged them to do the same the assembly elections.

Promoted
Listen to the latest songs, only on JioSaavn.com
BJP sources said Yogi Adityanath is the party's best bet to consolidate the Hindu vote not only because of his hardline Hindutva image, fiery speeches often labelled "polarising" by rival parties and frequent promise that a Ram temple will be built in Ayodhya, but also because the 45-year-old has an appeal across castes. The UP chief minister is a Kshatriya by birth but as a practicing priest he draws support from Brahmins and other upper castes, they said.

The simple life he leads, say party leaders, also appeals to the backward castes and Dalits.