Jammu and Kashmir has been under Governor's Rule since June, when the Bharatiya Janata Party ended its ruling alliance with former Chief Minister Mehbooba Mufti. 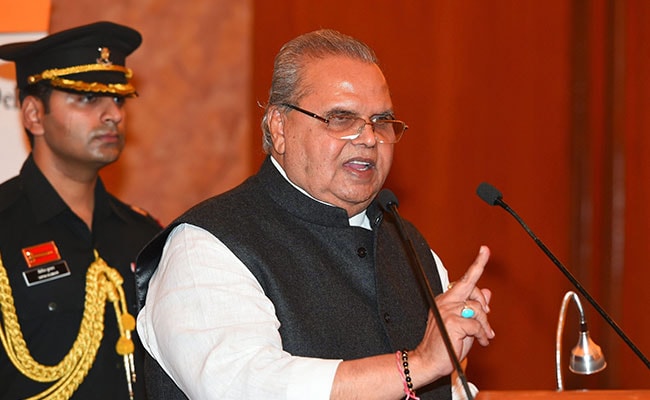 Jammu and Kashmir Governor Satya Pal Malik dissolved the state assembly on Wednesday evening after rival claims to form government from former Chief Minister Mehbooba Mufti and People's Conference leader Sajad Lone, who is backed by the Bharatiya Janata Party (BJP). The state has been under Governor's Rule since June, when the BJP ended its ruling alliance with Ms Mufti.

Ms Mufti said her Peoples' Democratic Party has the support of arch-rival Omar Abdullah's National Conference and the Congress.

In a statement, the governor justified dissolving the assembly citing reports of extensive horse trading.

Here are the Live Updates on Jammu and Kashmir Assembly:

Nov 22, 2018 14:19 (IST)
"Legally, we don't have a case to make. As I don't have a document on which to claim that the governor ignored what we had to say. My conversation was with the PDP. It is for the PDP to decide whether it wants to take legal recourse," says National Conference leader Omar Abdullah.
Nov 22, 2018 14:03 (IST)
Chairman of Jammu and Kashmir People's Conference Sajad Lone says: "These parties will go to any extent to keep power just among themselves. Whatever they might say against each other is just theatre. They will go to any extent to keep new-comers out."
"It is quite easy to communicate on Twitter as phones are so easy to access. It may not be the norm, but I don't think it is unusual either," Mr Lone tells NDTV.
Nov 22, 2018 13:32 (IST)
Congress leader Ghulam Nabi Azad says: "We don't have any complaints from the Governor. He is a very nice man. We have complaints from the central government that if they had to dissolve the assembly, they should have done it four-five months ago when they withdrew support from the PDP."
For these four-five months, the BJP tried to form their own government but they didn't have a majority, the Congress leader was quoted as saying by news agency ANI. "So they tried to break MLAs from other parties. When they saw that another government could have been formed, the BJP dissolved the assembly."
Nov 22, 2018 13:27 (IST)
Finance Minister Arun Jaitley says in today's Cabinet meeting, the issue (Jammu and Kashmir assembly dissolution) was not an agenda for discussion, but the Cabinet was briefed about it.
Nov 22, 2018 13:06 (IST)
Meeting of BJP Core group underway over dissolution of Jammu and Kashmir assembly, reports news agency ANI.
BJP state president Ravinder Raina and former deputy chief minister Nirmal Singh among those present at the meeting. 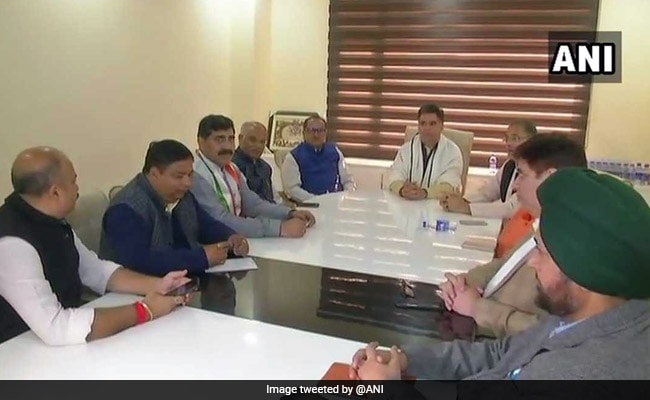 Nov 22, 2018 12:52 (IST)
"How can Omar Abdullah and Mehbooba Mufti, who never saw eye-to-eye, come together and form an alliance all of a sudden?" asks Jammu and Kashmir BJP chief Ravinder Raina.
Nov 22, 2018 12:44 (IST)
Congress leader Manish Tiwari says: "When you (BJP) were in an alliance with PDP, it was a nationalist party for you. When it left the alliance, it became anti-national (for BJP)."
"All those who have made the allegation that the NC, PDP and Congress came together after getting directives from Pakistan, prove the charge or issue a public apology," he adds.
Nov 22, 2018 12:26 (IST)
"It is unfortunate that a senior BJP leader has said we have got instructions from Pakistan. I challenge Ram Madhav and his associates to prove this with evidence. You are disrespecting sacrifices of my colleagues who refused to dance at Pakistan's instructions and then died," says Omar Abdullah.
Nov 22, 2018 12:22 (IST)
"Why will they go to court? They were demanding this since five months. I want that they go to court, it's their right, they should go," says Jammu and Kashmir Governor Satya Pal Malik on reports that PDP will approach court against dissolution of assembly.
Are governments formed through social media, the governor asks. "I neither tweet nor see the tweets. I selected yesterday for the decision (dissolution of assembly) as it was a holy day, it was Eid. Election Commission will decide when polls will be held.
Nov 22, 2018 12:20 (IST)
This is the first time that a fax machine has gagged democracy, former Jammu and Kashmir Omar Abdullah says. "What kind of a fax machine is this which starts functioning when asked to? There should be an investigation into the fax machine's working," he adds.
PDP's Mehbooba Mufti had tried to fax her letter yesterday intimating the governor that she would want to stake claim to form the government, but the fax machine at the Jammu and Kashmir Raj Bhavan reportedly wasn't working.
"Yesterday was Eid. There was no one in the Raj Bhawan to even give me food. She could have come to me the day before," Jammu and Kashmir Governor Satya Pal Malik has said. "Even if I had got the fax, my decision would have been the same," he adds.
Nov 22, 2018 12:11 (IST)
National Conference (NC) leader Omar Abdullah says if the governor has claimed that there was horse trading and MLAs were being brought, it should be probed. "Who was doing horse trading and who was handing out money to the MLAs? We want to know. And people have a right to know too," he adds.
"More of my workers have died in the last 30 years, than yours (BJP's). 3,000 of my workers have sacrificed for this nation. Don't lecture us on sacrifice and question what we have done. We know what we have done, the children of those who have lost their loved ones know what has been done. Those whose tears haven't dried yet know what sacrifices their loved ones have done. If you have the guts, bring proof or apologise," says Mr Abdullah after BJP leader Ram Madhav's comment that PDP and NC working on orders coming from across the border.
"People like you (Ram Madhav) act like cowards who make an allegation without any proof and then run away," he adds.
Nov 22, 2018 11:13 (IST)
National General Secretary of Bharatiya Janata Party Ram Madhav and National Conference leader Omar Abdullah engage in a war of words on Twitter.

No, misplaced attempts at humour won't work. You HAVE claimed my party has been acting at the behest of Pakistan. I dare you to prove it! Place the evidence of your allegation of NC boycott of ULB polls at Pak behest in public domain. It's an open challenge to you & your Govt. https://t.co/7cumKwKxuM

I dare you @rammadhavbjp ji to prove your allegation. You have RAW, NIA & IB at your command (CBI too is your parrot) so have the guts to place evidence in the public domain. Either prove this or be man enough to apologise. Don't practice shoot & scoot politics. https://t.co/KEbOo0z6O2

Nov 22, 2018 10:33 (IST)
BJP national general secretary tells news agency ANI: "PDP and NC (National Conference) boycotted local body polls last month because they had instructions from across the border. Probably they had fresh instructions from across the border to come together and form the government. What they did prompted the governor to look into the whole issue."
"Only the governor can answer why his home's fax (machine) is not working. Only he should answer. But this is a lame excuse on the part of Madam Mehbooba (Mufti). In the letter, she never claimed that she will form the government, she said I will come and see you and stake the claim. It was all a drama," he adds.
Nov 22, 2018 10:21 (IST)
Samajwadi Party chief Akhilesh Yadav says sudden dissolution of Jammu and Kashmir Assembly is undemocratic. "Today, from Kashmir to Kerala, everywhere democracy is under threat. The people of the country will have to come together, otherwise democracy and public opinion will be gagged," the former Uttar Pradesh chief minister tweets.
Meanwhile, Congress leader P Chidambaram says like in all other matters, it is the Gujarat model that has appealed to the Jammu and Kashmir Governor.

The Westminster model of democracy is outdated. Like in all other matters, it is the Gujarat model that has appealed to the J&K Governor

Dissolution opportunistic& illegal; done cos of centre& bjp. 3biggest parties by definition have requisite numbers &inconceivable tht none even alld 2stake claim on puerile & comic pretexts of phone, fax etc!BJP's scorched earth policy:if nt me, no one else, even if anti natl int

When a Governor brazenly plays politics under instructions ' Satya ' becomes a pawn in the hands
of ' Asatya ' .

Nov 22, 2018 08:46 (IST)
The Bharatiya Janata Party (BJP) has called for an important meeting with all its MLAs today, news agency ANI quoted a party leader as saying.
"We will decide the future course of action. We wish that the Assembly elections in Jammu and Kashmir are conducted along with the Parliament elections," says BJP state president Ravinder Raina.
Nov 22, 2018 08:45 (IST)
Election Commission to examine if the model code of conduct can be imposed in Jammu and Kashmir or not, after Governor dissolves Legislative Assembly, according to news agency ANI.
Nov 22, 2018 08:39 (IST)
The Bharatiya Janata Party says the best option in such a scenario is to "go in for a fresh election at the earliest."
"This assembly cannot produce a stable government," it adds.
Nov 22, 2018 08:38 (IST)
The Bharatiya Janata Party on its Twitter handle says the proposed alliance between the Indian National Congress (INC) and the Peoples Democratic Party (PDP) broke up even before it was formed. "They have taken contradictory positions on dissolution. One supports it and the other opposes it."

J&K needs a firm administration to deal with terrorism and not a combination of terror-friendly parties.