Yogi Adityanath, while inviting France to invest in Uttar Pradesh, said the scope of investment in the state is "immense". 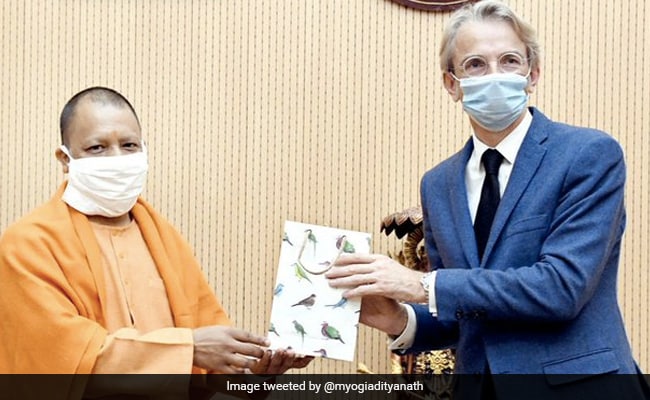 The ambassador said France wants to increase cooperation with India.

Ambassador of France to India Emmanuel Lenain on Wednesday called upon Uttar Pradesh Chief Minister Yogi Adityanath at his official residence here and had a courtesy meeting, the state government said in a statement issued Lucknow.

Yogi Adityanath, while inviting France to invest in Uttar Pradesh, said the scope of investment in the state is "immense".

He thanked the French government for making available fighter jet Rafale. He also said France is a partner of India against terrorism.

Twenty-four 24 French companies had participated in the Defence Expo held in Lucknow in February this year.

The chief minister said to boost investment in UP, the state government has formulated different sectoral policies. "A positive atmosphere has been created to attract investment. As far as the ease of doing business is concerned, UP is number 2 in the country. Of the two defence corridors in the country, one is in UP. In the defence corridor, there many possibilities of investment in various sectors including cyber security".

He also said that in France, there is a big market for Uttar Pradesh's "one district, one product", according to the statement.

"Students from here will be invited for studies in universities of France," the ambassador said. He also said his team visited IIM Lucknow, and will tour other universities in the state. France wants to increase cooperation with UP in the education sector, he said.

The envoy said that due to the situation arising out of COVID-19 and to strengthen the supply chain, French companies are shifting from China to elsewhere. "For this, India is the first priority country," he said.

The ambassador said French companies will be informed about positive environment of investment in Uttar Pradesh.