The Gujarat government on Monday told the Supreme Court that the men were released as they had been in jail for 14 years and their behaviour was found to be good.

A court document shows that the premature release of 11 men convicted for the gang rape of Bilkis Bano and killing of her family during the 2002 Gujarat riots, was approved by the home ministry within two weeks and that the CBI and a special court had opposed the clearance.

The Gujarat government on Monday told the Supreme Court that the men were released as they had been in jail for 14 years and their behaviour was found to be good, and the centre had also conveyed its approval.

The state had sought the centre's approval for the remission of the 11 convicts on June 28, 2022, which the ministry had okayed on July 11, shows the affidavit.

The convicts walked free on Independence Day under an outdated remission policy of the state government, setting off a huge political controversy. While such releases need the approval of the Union Home Ministry, the state had not clarified about the clearance, leaving it a grey area.

The affidavit submitted to the Supreme Court says, the Union Home Ministry had approved the premature release through a letter dated 11.07.2022. The letter from the ministry, accessed by NDTV, said it gives "concurrence/approval of the Central government under section 435 of CrPc for the premature release..." 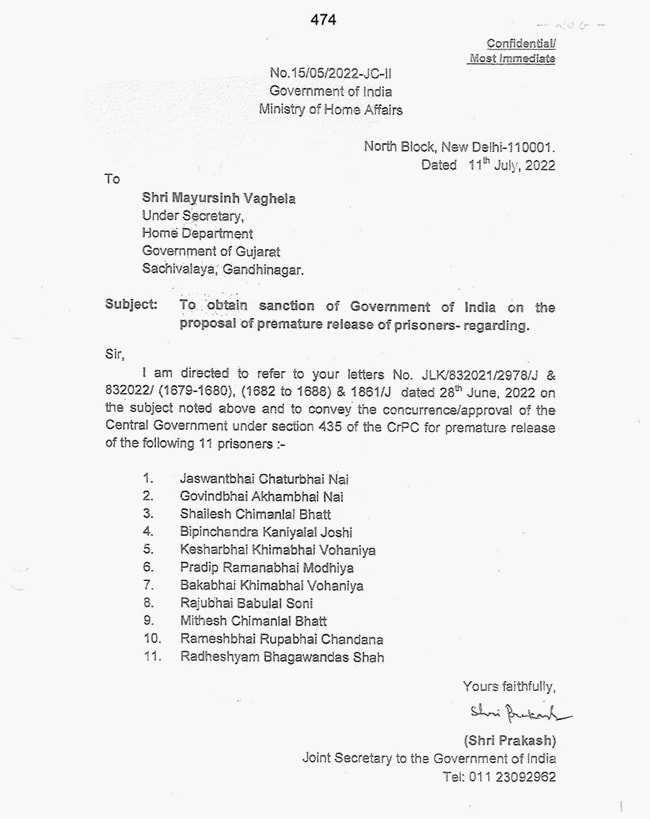 The top court is hearing three petitions challenging the release of the men. Document shows that the CBI and a special civil judge had opposed their early release.

The CBI, in a letter to the superintendent of Godhra sub-jail last year, had said in the offence committed was "heinous, grave and serious" and hence they "cannot be released prematurely and no leniency may be given" to them.

The special judge too had opposed their early release, observing that "the crime was committed only on the ground that the victims belong to a particular religion. In this case, even minor children were not spared."

Critics have questioned whether the Union home ministry had given clearance for the release, given that the current laws in both centre and the state have restrictions on the premature release of those convicted of rape or sentenced to life imprisonment.

This clause was not present in Gujarat's 1992 remission policy, on the basis of which an advisory committee had recommended the release of men.

One of the petitioners contended that the case was investigated by the CBI, and so, the grant of remission solely by the Gujarat government without any consultation with the Central government is "impermissible" in terms of the mandate of Section 435 of the Code of Criminal Procedure, 1973.

The court had asked the Gujarat government to file the entire record of the proceedings in the Bilkis Bano case, including the remission order given to the convicts.

Seven members of Bilkis Bano's family were murdered before her eyes -- among them her three-year-old daughter, whose head was bashed with a rock. Seven other relatives, who she says were also killed, were declared "missing".

The woman, 21 years old and five months' pregnant at the time, was then gang-raped. The family was attacked as they hid in the fields in Gujarat's Dahod, as violence swept the state following the attack on Sabarmati Express, in which 59 'kar sevaks' died.

The level of their atrocity had brought Bilkis Bano the highest-ever compensation in a rape case -- a job, a house and Rs 50 lakh -- awarded by the Supreme Court in 2019.

The convicts were sentenced to life term in jail by a special court in Mumbai, which was later upheld by the High Court.

Bilkis Bano has said she was not consulted or informed about the decision.

NDTV has found that five of the 10 members of the advisory committee of the Gujarat government, which recommended the release, have links with the BJP.

The opposition parties have strongly hit out at Prime Minister Narendra Modi over the move, which came within hours of his praise for "Nari Shakti" in his Independence Day speech, and said this is the "real face" of New India under the BJP.

Asaduddin Owaisi, the chief of AIMIM, said the Gujarat government had released the convicts in violation of the guidelines of its own home ministry.