Former Congress president Sonia Gandhi had always been assigned first row seats at official functions for more than a decade. 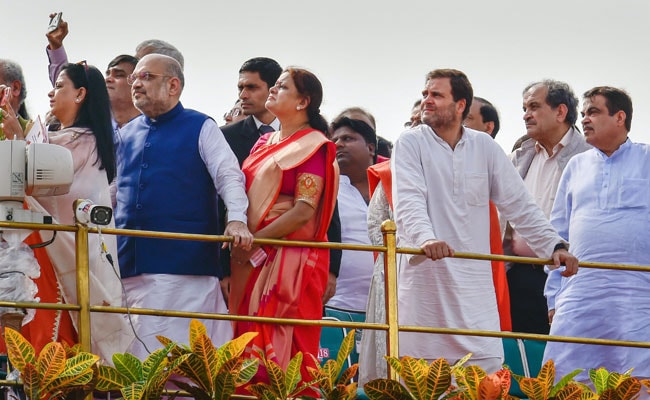 Rahul Gandhi, whose sixth row seat during this year's Republic Day parade had led to howls of protest from the Congress, today watched Prime Minister Narendra Modi speak from the ramparts of historic Red Fort from his first-row seat in the enclosure for dignitaries. Mr Gandhi was seated next to BJP president Amit Shah and his wife.

Ghulam Nabi Azad, the Leader of opposition in the Rajya Sabha who had accompanied him, was in second row. Delhi Chief Minister Arvind Kejriwal was in the third.

The government's decision to assign a seat in the fourth row and later move Mr Gandhi, 48, to the sixth row at the Republic Day parade this year was seen by the Congress as an attempt to slight the party's mint-fresh chief.

His mother and predecessor Sonia Gandhi had always been seated in the first row by the BJP-led national coalition too. Mr Gandhi had then told NDTV that he was not bothered about where he sits but his party saw an effort to "deliberately humiliate him".

The Congress had also alleged that the BJP-led government also ensured that no visiting foreign dignitary met opposition leaders, a convention followed for years.

From all available reports, there is nothing to suggest that Mr Gandhi and the two BJP leaders on either sides, Mr Shah on one and Highways Minister Nitin Gadkari on the other, exchanged anything else than pleasantries at the Independence Day function today.

But their parties later attacked each other through the media.

"We wish that at least in his last speech, he would have spoken the truth," Congress spokesperson Randeep Surjewala said.

Mr Shah and Mr Gandhi later hoisted the national flag at their respective party offices in the national capital.

The Congress also took a swipe at Mr Shah, the BJP's master strategist, who seemed to drop the national flag when he probably pulled the wrong string during the flag hoisting function. "Those who can't handle the national flag, how will they run the country," the Congress tweeted its swipe.