Controversy over Fabindia's 'Jashn-e-Riwaaz" comes exactly a year after Tanishq, a jewellery brand owned by the Tatas, was abused for an ad trolls claimed promoted 'love jihad'

Under pressure from trolls' attacks, Fabindia has withdrawn the 'Jashn-e-Riwaaz' ad (File)

Indian clothing brand Fabindia has withdrawn an advertisement for a clothing collection - called 'Jashn-e-Riwaaz' - after senior BJP leaders slammed the brand and accused it of 'defacing' Diwali by linking the festival to an Urdu term the company has said means "celebrations of rituals/festive celebrations".

The now-deleted social media post had this message: "As we welcome the festival of love and light, Jashn-e-Riwaaz by Fabindia is a collection that beautifully pays homage to Indian culture."

The ad read: "The rustle of silk...  gleam of zari. The sparkle of jewels... fragrance of flowers in hair. The sweetness of mithai & happiness of homecoming. Let the festivities begin with 'Jashn-e-Riwaaz". 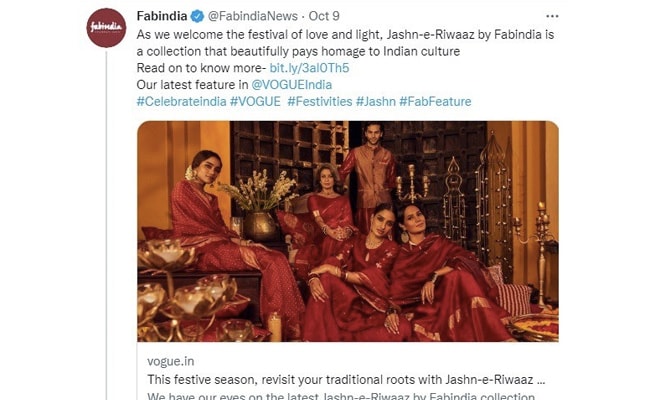 Fabindia has now deleted the advertisement from social media

Faced with abuse Fabindia has now withdrawn the ad and issued a clarification that says 'Jashn-E-Riwaaz' was not its Diwali clothing collection; the 'Jhil Mil se Diwali' collection has yet to be launched.

NDTV has learnt Fabindia "comes out with capsules of collection every month every 15 days, and for various Indian festivals, including Diwali, Onam and Durga Puja. 'Jashn-e-Riwaaz means "celebrations of rituals/festive celebrations" and has no specific connection to Diwali, NDTV was told.

Attacks were spurred by a tweets from firebrand BJP MP Tejasvi Surya, who is also head of the party's youth wing. Surya tweeted complaining about the "Abrahamisation of Hindu festivals".

"Deepavali is not Jashn-e-Riwaaz. This deliberate attempt of Abrahamisation of Hindu festivals, depicting models without traditional Hindu attires, must be called out... and brands like Fabindia must face economic costs for such deliberate misadventures," Tejasvi Surya declared.

This deliberate attempt of abrahamisation of Hindu festivals, depicting models without traditional Hindu attires, must be called out.

And brands like @FabindiaNews must face economic costs for such deliberate misadventures. https://t.co/uCmEBpGqsc

He also attacked Fabindia because the models were not wearing "Hindu tradition(al) clothes".

"If Fabindia is so Secular, let it serve them. We will find a different Outlet!" the BJP's CT Ravi, who is the party's National General Secretary in-charge of Goa, Maharashtra and Tamil Nadu, tweeted.

If @FabindiaNews is so Secular, let it serve them.

We will find a different Outlet !

IT industry veteran TV Mohandas Pai re-tweeted Surya's message, adding: "Yes very true, Fabindia is doing this deliberately and consumers must protest this misuse like they did for others."

Yes very true, @FabindiaNews is doing this deliberately and consumers must protest this misuse like they did for others. https://t.co/Ip3t0Tov0u

Some Twitter users also demanded people boycott Fabindia, triggering a Twitter trend by that name - one that was backed by the BJP's Kapil Mishra, against whom there have been demands to file a case for allegedly instigating last year's Delhi riots.

They don't deserve our money

Boycott Fabindia is trending because they've poetically named their Diwali collection - Jashn-e-Riwaaz. This is beyond ridiculous. How does naming a collection in Urdu lessen your Diwali for you?

Bhakts are boycotting FabIndia because it used an Urdu phrase for the Diwali clothing line.

By that logic, they should boycott Diwali too, because it has Ali in it.

Controversy over Fabindia's new clothing collection comes almost exactly a year after Tanishq, a popular jewellery brand owned by the Tatas, was bombarded with abuse for an advertisement - the Ekavatam campaign - featuring an interfaith baby shower that trolls claimed promoted 'love jihad'.

The brand was eventually forced to withdraw the ad and issue an apology, but only after it said it was doing so "keeping in mind... the well-being of our employees, partners and store staff".