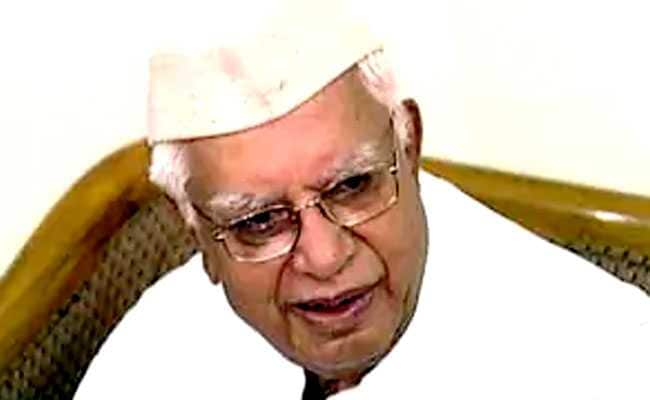 Veteran politician ND Tiwari died today at the age of 93 after prolonged illness at Delhi's Max Hospital. His condition had deteriorated after many of his organs stopped working. It was his 93rd birthday today.

Oct 18, 2018 20:11 (IST)
His Contribution As People's Representative Will Always Be Remebered: Siddaramaiah

Saddened by the death of veteran @INCIndia stalwart #NDTiwari. My condolences to his family and friends. His contribution as people's representative will always be remembered.

Oct 18, 2018 18:56 (IST)
Uttarakhand government announces three-day state mourning in the state after ND Tiwari's death. During this period the national flag will be flown at half-mast in all the government offices throughout the state, news agency ANI reported.
Oct 18, 2018 18:16 (IST)

Sad to hear about the death of veteran politician #NDTiwari; former CM of Uttar Pradesh, Uttarakhand & Union Minister.His contribution to nation building & upliftment of all sections of the society will be remembered always. Condolences to his family & loved ones.May his soul RIP

Sad to hear of the passing of veteran political figure and former Union minister Shri N.D. Tiwari. As chief minister of Uttar Pradesh and later Uttarakhand, he contributed much to development and public welfare. My condolences to his family and associates #PresidentKovind

My deepest condolences on the demise of Shri ND Tiwari. A colleague in the Congress Party & the Government for decades, he was an able administrator committed to the cause of his people.

Saddened By The Sudden Demise Of Former Uttarakhand and Uttar Pradesh Chief Minister Shri #NDTiwari At The Age of 93. My Thoughts And Prayers Are With The Bereaved Family Members. May His Soul. Om Shanti.