The 23 European Union MPs who visited Jammu and Kashmir were the first international group to do so since the government ended special status to the state on August 5. In Delhi, they met Prime Minister Narendra Modi and National security Advisor Ajit Doval. 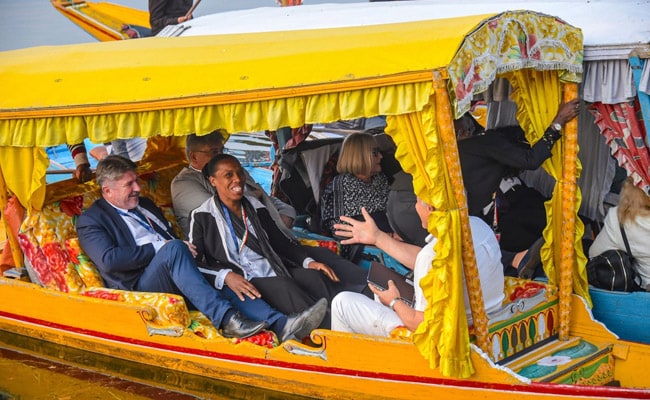 Twenty-three European Union MPs went on a visit to Jammu and Kashmir earlier this week.

Questions swirling around the visit of European lawmakers to Jammu and Kashmir, the foreign ministry today said it was in the know about the matter. Such visits were "facilitated" before and the bigger question was whether it serves the national interest, ministry spokesperson Raveesh Kumar said.

On Tuesday, the 23 lawmakers visited Jammu and Kashmir, where restrictions have been in place since the Centre stripped the state of its special status granted under Article 370 and split it into two Union Territories. The visit was a first by an international group since August 5, and the Congress, livid, had dubbed it an "immature, ill-advised and ill-conceived PR exercise" by the government.

"It was brought to attention of the government that this delegation is going to visit India. The purpose of the visit was their desire to know how terrorism has challenged India... It was like a familiarisation visit," foreign ministry spokesperson Ravish Kumar said amid Congress's sharp comments.

This was the first time the foreign ministry commented on the issue. Following Prime Minister Narendra Modi's meeting with the MPs earlier this week, the government had issued a statement, quoting him.

But the Congress questioned why the foreign ministry had been "totally sidelined". The party also questioned the involvement of an "International Business Broker" in the matter.

"Will the Prime Minister tell as to who is Madi Sharma? Why and in what capacity is Madi Sharma fixing an appointment of Prime Minister with a delegation of EU MPs on a personal visit and why is Government of India facilitating it? Where is the money to finance the entire trip coming from?" Congress spokesperson Randeep Surjewala had said.

Mr Kumar today said, "I think let us be very clear that these visitors who come, do not have to necessarily come through official channels".

The lawmakers, he said, represented different countries of Europe, different political parties and a spectrum of views. "Meetings were therefore accordingly facilitated as has been done on many previous occasion," he said.

Such visit, he said, are "sometimes organised by us and sometimes they take place on their own". "The important point is whether such engagements serve larger interests. Does it serve the national interest?" he said.

Asked if such visits will take place in the future, Mr Kumar responded in the affirmative. But it will "depend on the content and the ground situation," he said.

"We will engage with people belonging to a range of social spectrums in other countries. This is being done to promote our foreign policy... (it) promotes people to people contact," he added.

Of the 27 MPs who visited Delhi, 23 had visited Kashmir. A Liberal Democrat MP, Chris Davies, alleged that he was dropped from the group visiting Delhi after he asked for unfettered access to Kashmir.

Madi Sharma, who organised the visit --  sponsored by  International Institute for Non-Aligned Studies, a think tank -- sent him a regret letter after he put forth his condition, he said.

On Twitter, Madi Sharma describes herself as a Social Capitalist, International Business Broker and Education Entrepreneur. She was present when the European MPs met with Prime Minister Narendra Modi and National Security Adviser Ajit Doval on Monday.