Elections 2019: The saffron-robed man, introduced by Akhilesh Yadav as "baba", can be seen walking beside him, but his face is not visible. 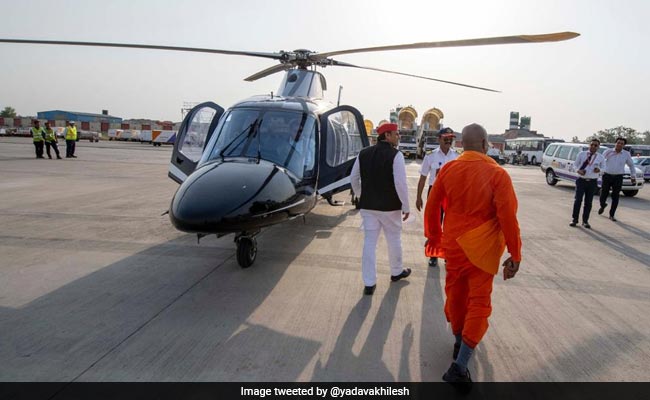 Former Uttar Pradesh chief minister and Samajwadi Party chief Akhilesh Yadav on Saturday introduced a saffron-robed man, whom he referred as "baba", in one of his tweets.

The "baba" is seen walking alongside Mr Yadav, but his face is not visible.

In a tweet in Hindi, Mr Yadav, said, "We cannot bring fake God, but have brought a "baba" ji. Except Gorakhpur, he will tell the truth about the government to everyone in the state."

In an interview to news agency ANI yesterday, Mr Adityanath had attacked the SP chief saying that Akhilesh Yadav was frustrated as he was being treated as an underdog in the alliance with the BSP.

"This is the frustration of Akhilesh Yadav. He is frustrated because the SP once won 37 (Lok Sabha) seats from Uttar Pradesh under the leadership of Mulayam Singh Yadav. Now he is contesting only 37 seats," the chief minister said.

"When he sits with Mayawati on the dais, he is seated on a small chair while Mayawati herself sits on a bigger one. When he goes to meet Mayawati, he is asked to keep his footwear out of the room. This is his position," Mr Adityanath added.