Sukumar Sen had served as the first Chief Election Commissioner of India from March 21, 1950, till 19th December 1958. 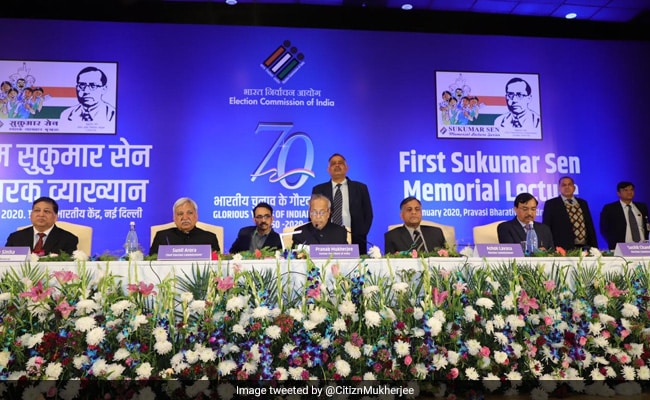 The memorial lecture was addressed by former President of India Pranab Mukherjee.

Sukumar Sen had served as the first Chief Election Commissioner of India from March 21, 1950, till 19th December 1958.

The memorial lecture was addressed by former President of India Pranab Mukherjee.

While drawing attention at the ongoing protests, the former President in his speech said: "The last few months have witnessed people come out on the streets in large numbers, particularly the young have voiced their views on the issues which they consider as important. Their assertion and belief in the Constitution of India are particularly heartening to see."

Chief Election Commissioner Sunil Arora said: "The objective of this lecture is to make a positive intervention in the democratic and electoral discourse, within the ambit of the Constitutional mandate of the Election Commission of India."

He said the Election Commission wishes to involve a wide cross-section of people including political parties, leading constitutionalists, legal luminaries, academicians, civil society activists in it.

A reprint of the Report on India's First Election was released by the former President at the event along with a postal stamp in memory of Sukumar Sen was unveiled.

It has been proposed that every year a leading figure, whether from India or abroad, who had made a recognisable contribution in furthering democracy, would be invited to deliver the lecture.

Sukumar Sen conducted the first two Lok Sabha elections of India held in 1952 and 1957 simultaneously with the Legislative Assembly elections based on the universal adult franchise.

The lecture was attended by Mr Sen's family along with invitees from the national political parties, members of the academia, civil society organisations, senior civil servants and international delegates.