Why The Economic Survey Is Printed In Lavender This Year

Economic Survey 2020: The Economic Survey, tabled in parliament a day before the Budget, has projected economic growth to rebound and hit 6%-6.5% in the next financial year starting April 1. 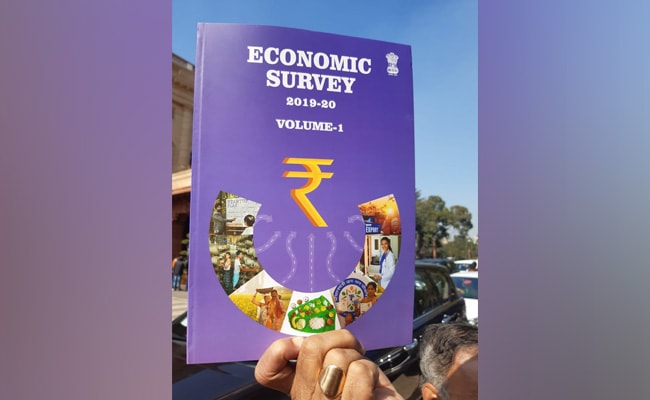 The Economic Survey's theme this year is "wealth creation", Chief Economic Advisor Krishnamurthy V Subramanian said today, explaining that its lavender cover symbolizes the blending of the old and the new.

The survey, tabled in parliament a day before the Budget, has projected economic growth to rebound and hit 6%-6.5% in the next financial year starting April 1.

"The lavender colour of the Eco Survey captures the new 100-rupee note. That, together with the old note that has been around for very long," Mr Subramanian said. The 100-rupee is the oldest currency note in the country.

A synthesis of the old and new, or "contemporary evidence with ancient ideas".

"Wealth is both a cause and effect of investment. That is why it is important for us to focus on wealth creation," said the top economic adviser.

He referred to the four ancient objects of human pursuit - Dharm, Arth, Kaam and Moksh. "Arth or wealth is among these noble pursuits," said the official.

The Economic Survey said there are tentative signs of bottoming out of a slowdown in manufacturing activity and global trade, which, it said, "will have a positive impact on growth in the next fiscal".

Last year, the Economic Survey was in a sky blue colour, which was meant to convey "unfettered blue sky thinking" or ideas without limits.

"When was the last time you looked at the blue, unfettered sky and wondered about the power of the unfettered "blue sky" thinking," Mr Subramanian had tweeted a day before the Economic Survey 2019.

And the year before, a pink cover was an ode to women's empowerment.