DRDO's New Covid Drug 2-DG: All You Need To Know

DRDO's New Covid Drug 2-DG: The DCGI recently granted permission for emergency use of the drug as an adjunct therapy in moderate to severe Covid patients. 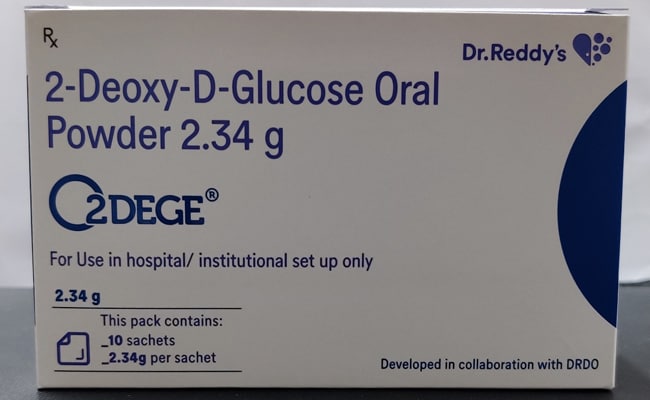 As India battles the second wave of Covid infections, an anti-Covid drug found to help speed up recovery and reduce oxygen dependence has been launched by the government.

The drug, named 2-deoxy-D-glucose (2-DG), has been developed jointly by Institute of Nuclear Medicine and Allied Sciences, a lab of the Defence Research and Development Organisation (DRDO), in collaboration with Dr Reddy's Laboratories, Hyderabad.

The Drugs Controller General of India (DCGI) earlier this month granted permission for emergency use of the drug as an adjunct therapy in moderate to severe Covid patients.

How does the drug work?

A government release said it accumulates in the virus-infected cells and prevents virus growth by stopping viral synthesis and energy production. What makes this drug unique is its selective accumulation in the infected cells, the release said.

It should also work against various strains of the Covid virus, DRDO chairperson Dr G Satheesh Reddy has said.

How were the trials conducted?

In April 2020, INMAS-DRDO scientists conducted experiments with the help of Centre for Cellular and Molecular Biology and found that this molecule works effectively against Covid and inhibits viral growth. Based on the results, DGCI's Central Drugs Standard Control Organization permitted Phase-II trials.

In Phase-II trials conducted on 110 patients between May and October 2020, the drug was found to be safe. Covid patients who were administered the drug showed faster symptomatic cure than patients in the standard care group.

The DGCI then permitted Phase-III trials that were conducted on 220 patients between December 2020 and March 2021 at 27 Covid hospitals across several states. The results showed that a significantly higher proportion of patients in the 2DG group improved symptomatically and became free from supplemental oxygen dependence in comparison to those in the standard care group, said the government release. A similar trend was observed in patients aged more than 65 years.

What about the price and availability?

The government release said that being a generic molecule and analogue of glucose, the drug can be easily produced. It is also easy to consume as it comes in a powdered form in a sachet and can be taken orally by dissolving it in water.

Asked about the pricing of the drug, Dr Sudhir Chandna of DRDO has said it will depend on the scale of production. "Those factors are with Dr Reddy's Laboratories who are our industry partners," he was quoted as saying by news agency ANI. He added that efforts are being made to ensure that the drug is available in the market in the next few days.

Where does the drug fit in?

The drug has been launched at a time when the country is battling a devastating second wave of Covid infections that has triggered a race for medical oxygen and hospital beds in most parts of the country. In this situation, a drug found to expedite recovery and reduce oxygen dependence would ensure better availability of beds for patients requiring critical care. At the same time, it would prevent the rampant black marketing of oxygen equipment that has started in the wake of the crisis.