Despite Kamal Nath's Plea, Full-Page Ads Come Up On His 73rd Birthday

The newspaper advertisements narrated an incident from over four decades ago that served to describe Kamal Nath's loyalty to the party.

Kamal Nath had asked party workers to not indulge in wasteful expenditure on his birthday.

Although Madhya Pradesh Chief Minister Kamal Nath had asked party workers to avoid wasteful expenditure on his 73rd birthday, the state woke up to full-page newspaper advertisements listing out his achievements on Monday anyway. Apart from the usual words of felicitation, it narrated an incident from over four decades ago that reportedly served to describe his loyalty to the party.

"When the Janata Party sent Sanjay Gandhi to Tihar Jail In 1979, Indira Gandhi was concerned about his safety. So Kamal Nath deliberately entered into an argument with a judge, so that he could be sent to Tihar Jail too. He remained with Sanjay Gandhi through his stint there," the advertisement claimed.

It went on to describe how the Chief Minister was "unfairly" overlooked for the position in the early 90s. "In 1993, Kamal Nath was next in line to becoming the Chief Minister. However, Arjun Singh forwarded Digvijaya Singh's name instead and Kamal Nath was not appointed to the position," it claimed in an apparent reference to the factional rivalry in the state Congress.

As snippets of the advertisement were spread widely on social media, the opposition began taking potshots at the Congress. "It is shameful that Congress leaders are not sparing even their own Chief Minister, and that too on his birthday. One doesn't need a CBI probe to find out who issued the advertisement," said BJP spokesperson Rajnish Agarwal.

However, senior Congress leader Kantilal Bhuria termed the advertisement as a conspiracy hatched by the opposition party. "It's the BJP that pays money to get such ads printed. Congress organisational general secretary Chandra Prabhash Shekhar has already clarified that it was not commissioned by the party. We will soon find the truth behind it," he said.

Kamal Nath had earlier asked party workers to avoid indulging in "wasteful expenditure" to mark his birthday. "Do not put up banners, posters, hoarding and other publicity materials to mark my birthday, which falls on November 18. Everybody from party workers to organisations and the people should shun such kinds of publicity," he said in his appeal. 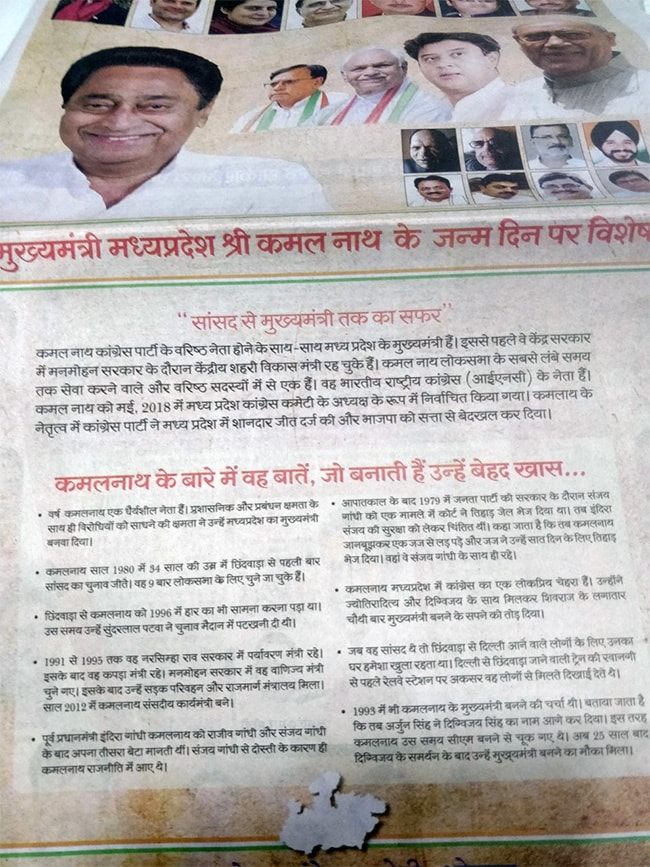 The advertisement that came out on Kamal Nath's birthday.

Over 100 Congress Leaders, Workers Detained In Gujarat For Protests On Fuel Prices