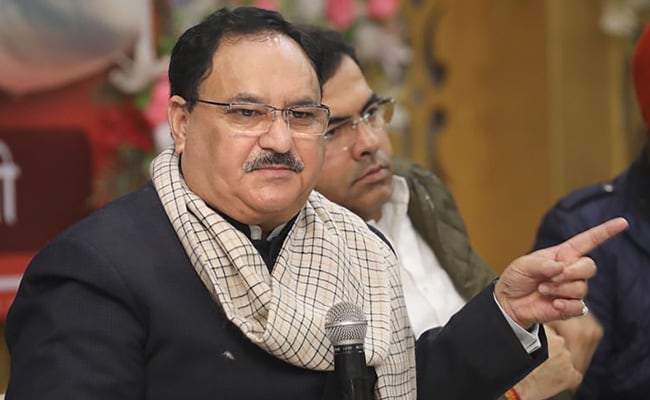 BJP national president JP Nadda on Friday slammed the AAP, alleging the Arvind Kejriwal-led government failed to construct more schools and hospitals and install CCTV cameras in the city as it had promised.

Mr Nadda, who was on January 20 elevated from the post of BJP's working president to its national president, was addressing a Nukkad Sabha in Pandav Nagar in the Lakshmi Nagar constituency.

The BJP chief accused the Aam Aadmi Party of not fulfilling its promises of adding more schools, hospitals, installing free WiFi and appointing anti-corruption ombudsman (Lokpal) in the capital.

"The AAP had promised adding 500 more schools, 30 new hospitals, 5,000 buses, lakhs of CCTV cameras, promised free WiFi at public places, Lokpal. But did they do it? They have not and that is their past," Mr Nadda said, cautioning voters to beware of the AAP's poll promises.

He cited infrastructure works undertaken by the BJP government at the Centre like the Eastern and the Western Peripheral Expressways, Meerut Expressway that he said have helped Delhi and nearby areas.

Mr Nadda, 59, also mentioned major decisions taken by the Narendra Modi government after the 2019 Lok Sabha polls, like abrogation of Article 370 and 35 in Jammu and Kashmir, banning triple talaq and bringing in the Citizenship Amendment Act, seeking to highlight the political willpower of the BJP.

"For most of the last five years, you kept saying that Modi ji is not letting you work and now you are claiming "Achche beete paanch saal" (five years were well spent). It doesn't add up well what you say. Your lies are easy to catch. They say something and do something else, while the BJP does what it says," Mr Nadda told a gathering, comprising mostly local party workers and supporters.

"There are several issues. We have to bring Delhi to the mainstream and ensure its progress. It's our national capital and a reflection of whole country," he added.

JP Nadda also hit out at the rival Congress for its stand on the Ayodhya land dispute and alleged that the national party and the AAP were misleading people on the citizenship law.

"Only the people sitting in this bagh (garden) or that bagh (referring to CAA protest at Shaheen Bagh in South East Delhi) and supported by the Congress are opposing the CAA. The Congress and AAP are spreading lies and misleading people on the citizenship law," he claimed.

The Lakshmi Nagar constituency in East Delhi will see a contest between sitting MLA Nitin Tyagi of AAP, Abhay Kumar Verma of BJP and Hari Dutt Sharma of Congress, among others.

Elections to the 70-member legislative assembly of Delhi are scheduled for February 8 and the results will come three days later.

In the last elections, the AAP had won 67 seats, while the BJP emerged winner on three seats.

Abhay Verma, the BJP's nominee from Lakshmi Nagar, said the MLA should be a local and not an outsider. "Mr Tyagi is from Mayur Vihar," he said.

If somebody gets a five-year chance, he should come with a report of his work when he asks for a re-election, alleging the AAP has not worked in Lakshmi Nagar.

"He comes at 10 and sits in the Jal Board office, leaves at 5. Doesn't work," Mr Verma claimed.