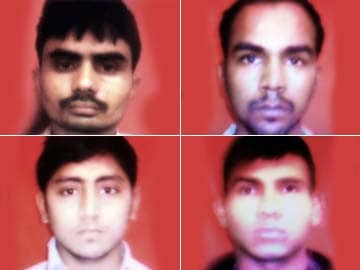 New Delhi: The Delhi High Court today confirmed the death sentence for four men convicted by a trial court for the brutal gang-rape and murder of a young medical student in December 2012.

Four of the six men arrested for the heinous attack were found guilty of rape and murder by a fast-track court, one of the changes the student's case has driven in India, and were sentenced to death in September last. ( Also read: Death penalty for crime that 'shocked collective conscience')

A fifth suspect hanged himself in jail in March last year; the sixth was 17 at the time of the attack and was sentenced to three years in a reform centre.

The lawyers of the four men  - Mukesh, Vinay Sharma, Pawan and Akshay Thakur - have said they will move the Supreme Court against today's High Court verdict.

The young woman's parents were present in court today. Outside her father said, "We are very happy. This verdict will effect many other cases." Around them people held up posters and raised slogans against the convicts.

On December 16, 2012, a Sunday evening, the student and her male friend were looking for  a way home after watching a film at a fancy south Delhi mall, and climbed into a private bus that had six men on it.

The brutality that followed on board would assail India and then the world within the next few hours. (Four convicted of rape & murder in case that became India's fight)

Her friend was thrown to the back of the bus after being battered with an iron rod, which was later used to violate her. The trial court had observed that she had "18 internal injuries."  It had held that "the act of pulling out the internal organ of the victim" was proof that the plan was to kill her.

45 minutes later, the couple was thrown from the bus. Doctors said they had not seen such egregious injuries.

For 10 days, she fought for her life in hospital in Delhi, while students and activists stomped determinedly through water cannons and batons, marching up to the President's door, demanding swift trials for women who are raped, and an overhaul of archaic laws to punish sexual offences.

Promoted
Listen to the latest songs, only on JioSaavn.com
After the student's death and amid protests the government introduced new laws which make stalking, voyeurism and sexual harassment a crime, and provide for the death penalty for repeat offenders or for rape attacks that lead to the victim's death.