"It was found that the ambulance was stuck in traffic for about 20 to 30 minutes due to jam caused by the cycle rally of the Haryana Pradesh Congress Chief, Dr Ashok Tanwar," the report said. 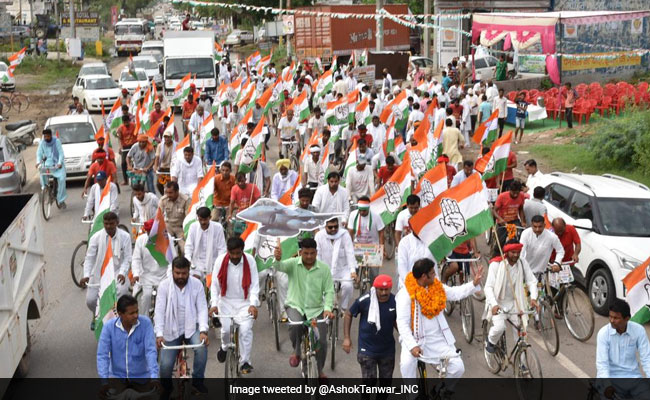 Delay in reaching the hospital caused the death of a newborn after an ambulance carrying the baby allegedly got stuck in a traffic jam because of a Congress rally, the investigation report ordered by the state government revealed today.

The child died soon after reaching PGIMS at Rohtak on Wednesday as the ambulance was stuck for "20 to 30 minutes" due to the cycle rally of Haryana Congress chief Ashok Tanwar in Sonipat district, the report said.

"It was found that the ambulance was stuck in traffic for about 20 to 30 minutes due to jam caused by the cycle rally of the Haryana Pradesh Congress Chief, Dr Ashok Tanwar," the report said.

Mr Vij had yesterday instructed Mr Agarwal to form a special investigation team to probe the matter and submit a report at the earliest.

He had also demanded police action while raising the issue with Chief Minister Manohar Lal Khattar.

The health minister said the members of the committee included deputy civil surgeon and senior medical officer who thoroughly investigated the matter.

"The committee has informed in its report that all documents were obtained and statements of the ambulance driver, fleet manager and paediatrician were recorded," he said.

"On the basis of these evidence, the main reason for the death of the newborn was delay in reaching hospital," he added.

He said that it was mentioned in the report that a call was received at Sonipat office of National Ambulance Service for an ambulance from Divya Hospital, Maniyari Pyau at 11.21 am to refer a newborn to Civil Hospital in Sonipat.

"The hospital management sent the ambulance from the community health centre Badkhalsa at 11.22 am which reached Divya hospital within 10 minutes," he said.

As per report, it takes 15 minutes to reach Civil Hospital from Divya Hospital, but on Wednesday the ambulance got delayed.

"Thereafter, the newborn was taken to a Special Newborn Care Unit where doctors found that the child was in critical condition with low heartbeat," he said.

The newborn was was then referred to PGIMS, Rohtak where he died during treatment, Mr Vij said.

The minister further said that an FIR was registered by the police as he assured action against the guilty after a thorough probe.

Mr Tanwar had taken out a 'Haryana Bachao Parivartan Lao' bicycle rally near Kundli village on the NH 1 targeting the BJP over the Rafale deal.

The Congress leader had yesterday tweeted that the infant's father had said the child died as the ambulance was not equipped with oxygen cylinders, paramedical staff etc.