The woman's brother said no one in the neighbourhood in Uttar Pradesh's Jalalabad came to help out of fear of the coronavirus. 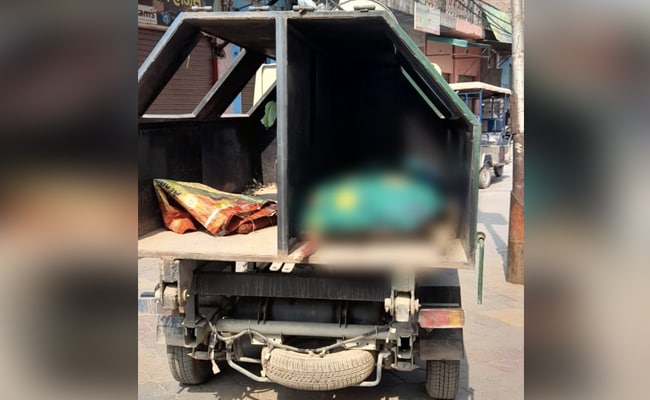 The photo of the incident in Uttar Pradesh's Shamli district was clicked by a witness.

Even in times of unspeakable crises, dignity in death can be considered a basic human right. But even that was too much to ask for a woman in Uttar Pradesh on Sunday when her body was taken for cremation in a municipal garbage van.

According to her brother Prabhas Sarkar, 65-year-old Balamati had been unwell for months in her home in West Bengal.

"The doctors said she had a brain haemorrhage," he said.

Since she had no one to take care of her, Prabhas brought her to his place in Jalalabad town in Shamli district late last month. But he could not save her and she died on Saturday evening.

After trying for hours on Sunday to find three others who could help him carry her body for cremation, Prabhas called the municipal corporation.

He said even though his sister had not died of COVID-19, neighbours were very afraid of the infection to offer any kind of help.

Finally, the municipality sent a garbage van to take her body for cremation. A photo clicked by a witness of the incident has been widely shared on social media and messaging platforms.

Prabhas, who runs a small homoeopathic clinic in Jalalabad, said he did not file a complaint because there was nothing else to be done.

When asked about the incident, Jasjit Kaur, the District Magistrate of Shamli, said she had ordered an investigation into the incident.

"We received information that the woman died at home. It was not Covid-related. Someone from her family contacted the municipal corporation and got the vehicle from there. We have a Covid control room and a helpline where people can call for ambulances and hearse vans," she told NDTV.

Uttar Pradesh has reported a huge spike in coronavirus cases in the past few weeks that has overwhelmed its hospitals and crematoriums.

The state government has been strongly criticised for threatening hospitals and people seeking medical help and necessities like oxygen on social media.

Widely believed to be under-reporting its deaths and infections, it has also tried to stop the media from reporting freely about the pandemic with measures like covering up crematoriums.