'Mask Day' In Karnataka, Yediyurappa, Others March To Spread Awareness

Karnataka Mask Day: Chief Minister BS Yediyurappa marched from the state secretariat to Cubbon Park in Bengaluru to spread awareness about wearing masks as a precautionary measure against COVID-19

The Karnataka government is observing 'Mask Day' today in a bid to spread awareness among people to use the face cover to contain the spread of coronavirus. A march was organized from Vidhana Soudha or the state secretariat to Cubbon Park in Bengaluru.

During the march there was hardly any social distancing, which is another key measure advised by experts to check the spread of the deadly virus. Even Prime Minister Narendra Modi on several occasions urged people, in his televised addresses, to maintain "Do Gaz Doori" at all costs.

"We have organized a walk from Vidhana Soudha to Cubbon Park to create awareness about the importance of wearing a mask as a preventive measure against COVID-19. We are celebrating 'Mask Day' at all district headquarters today," Mr Yediyurappa said adding that "a fine of Rs 200 will be imposed for not wearing a mask in public places." 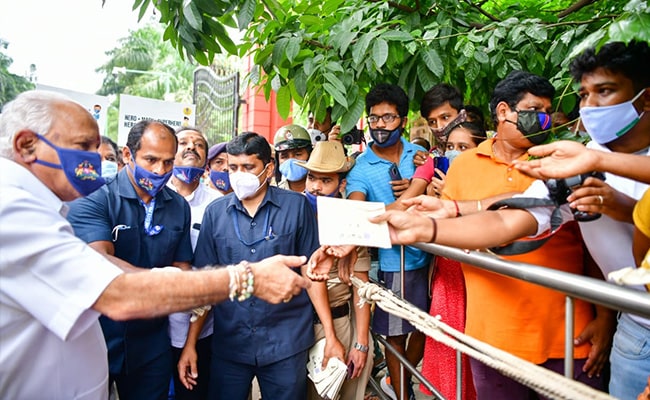 The use of masks and face covers are mandatory at public places as a part of the centre's guidelines, among other precautionary measures, against coronavirus.

As many as 7,530 people have detected positive for COVID-19 in Karnataka and over 90 have died according to the Union Health Ministry. The state government has made it clear that it is struggling to cope with quarantine facilities for thousands of people who are returning to the state. People arriving in Karnataka from high-risk states can go for testing by private labs at their own cost. The test would cost people Rs 650 and would be done using the pooling method.