Coronavirus: Rahul Gandhi had earlier sent sanitizers, face masks and soaps for distribution among the people of Amethi in Uttar Pradesh. 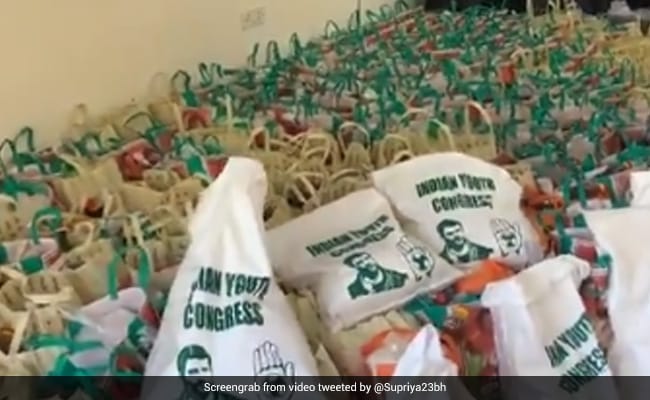 The Youth Congress members were seen putting packets of rice and pulse in cloth bags.

Members of the Indian Youth Congress (IYC) today launched the "Rahul kit" - relief material bags for the poor and migrant workers - in the name of party leader Rahul Gandhi to help those severely hit by the nationwide lockdown aimed at containing the spread of the novel coronavirus.

In a video posted on Twitter, the IYC members, wearing face masks, were seen putting packets of rice and pulse in cloth bags with pictures of Rahul Gandhi and Congress President Sonia Gandhi on them.

Mr Gandhi had represented the Amethi Lok Sabha seat since 1999. He lost the seat to Union Minister Smriti Irani in the last general elections. He is currently a Member of Parliament from Wayanad constituency in Kerala.

Earlier on Sunday, Rahul Gandhi took a swipe at Prime Minister Narendra Modi by posting two pictures on Twitter. The pictures indicated that even as the world is fighting the highly contagious virus with sanitisers and masks, India is doing the same with utensils and torches.

Millions across the country yesterday responded to PM Modi's call to turn off lights in their homes at 9 pm on Sunday and stand at their doors or in balconies and light candles or diyas or use torches or mobile flashlights for nine minutes to exhibit solidarity against COVID-19, which has infected over four thousand people in the country.

PM Narendra Modi imposed a 21-day lockdown on the country from March 24 midnight that will end in mid-April, aimed at containing the spread of the global pandemic, COVID-19.