Bengal has seen nine cases of COVID-19 infection and one death has been linked to the virus, as per data from the Union Health Ministry

Bengal Chief Minister Mamata Banerjee was seen drawing chalk circles near a roadside fruit seller in Kolkata today, as part of her government's efforts to educate people on the need for social distancing during the COVID-19 outbreak in the country.

In a video shared online by Trinamool Congress MP Derek O'Brien, the Chief Minister, dressed in her trademark white saree and holding a handkerchief to her face, can be seen pacing and drawing circles outside similarly masked fruit sellers as a crowd of people watch.

"No words..., Derek O'Brien, who has been critical of the centre continuing to hold crowded parliament sessions despite political leaders' calling for people to practice social distancing during the coronavirus pandemic, wrote in his tweet.

Bengal has seen nine cases of COVID-19 infection and one death has been linked to the virus, as per data from the Union Health Ministry. Across India over 600 cases have been reported and at least 13 people have died; this morning two additional deaths were reported from Kashmir and Maharashtra.

Enforcing social distancing, a measured urged by a number of politicians, including Prime Minister Narendra Modi, Delhi Chief Minister Arvind Kejriwal and Ms Banerjee too, is seen by experts as a critical step in stopping the transmission of the COVID-19 virus.

The virus is transmitted via droplets from the cough or sneeze of an infected person.

Ms Banerjee's efforts at spreading the message of social distancing comes a day after similar images emerged from around the country, with grocery shops and milk stores marking empty roads outside with numbered squares or circles drawn in white paint or chalk.

Each is placed a few feet from the other and in photos from Puducherry, shared by Lieutenant Governor Kiran Bedi, individuals can be seen carefully standing inside marked spaces and patiently waiting their turn to buy milk. 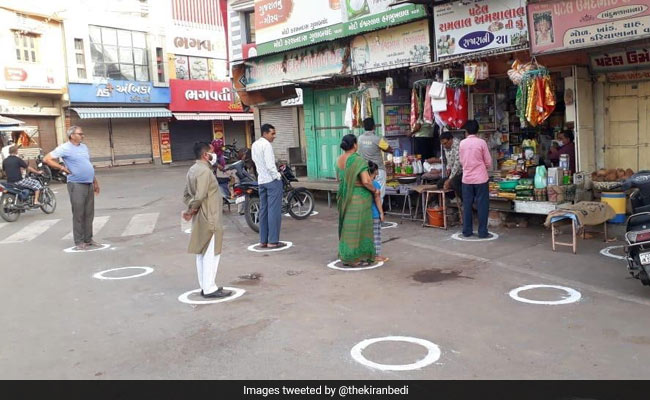 Videos were also shared online of similar queues outside a store in Gujarat's Mundra district, where people line up in numbered squares under the watchful eye of a police officer.

India is in the second day of a 21 day "total lockdown" ordered by the Prime Minister to halt the spread of the COVID-19 virus.

Under the lockdown, and curfew that has been imposed in some states, people have been prohibited from leaving their homes, except in an emergency.

Centre and state governments have assured people that essential supplies - food, water and medicines - will not be affected at this time, but confusion over what stores and services can be allowed to function has spooked rounds of panic buying and hoarding across the country.

On Wednesday Ms Banerjee warned Bengal government officials of action if they tried to stop vegetable vendors and personnel engaged in home delivery of essentials during the lockdown.

The Chief Minister has also taken a cue from her Odisha counterpart's notebook to ask for aid to migrant Bengali workers stranded in other states; Odisha Chief Minister Naveen Patnaik had earlier written to other chief ministers with this request and promised aid to those stuck in his state.