Salt-Rice, Water: How Migrant Workers Are Coping With Lockdown In Delhi

The state government is distributing food rations to those with ration cards but most migrant workers don't have ones that work in Delhi.

Eight days after giving birth to a baby girl, 22-year-old Mehak says she is living off food that she manages to get once every two days. When she gets really hungry, she drinks water. Labourers from Uttarakhand who work in north Delhi's Model Town, Mehak and her husband Gopal, 25, are among the thousands who have been pushed to the brink of starvation by the nationwide lockdown that was announced without warning three weeks ago to contain the coronavirus pandemic.

"We made a big mistake coming to Delhi. We have nothing to eat. There is no milk. We had just a bit of rice since the morning," Mehak told NDTV.

The couple said they did not even have resources to get to a hospital to have their daughter.

"There is no money, no work. Some people come to distribute food. We are managing with that," Gopal said. 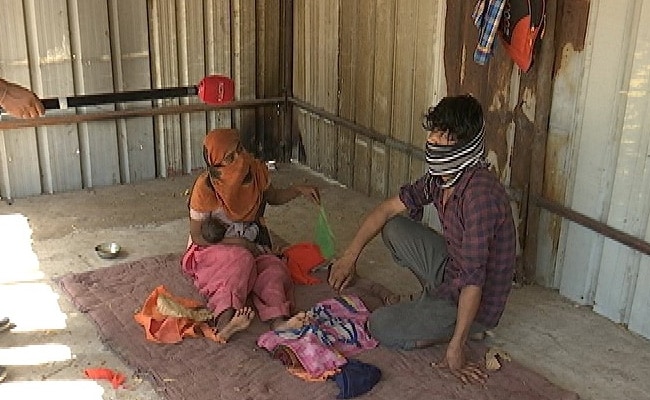 Mehak and Gopal say they manage to get get food every other day.

The state government is distributing food rations to those with ration cards but most migrant workers don't have ones that work in Delhi. The government has set up a website for such workers to register themselves but the page has been down for the last three days.

Hailing from Bihar, 30-year-old Chand Rani and her husband Madan, 32, used to work at a kiln in Haryana's Karnal that shut down after the lockdown. They somehow managed walk to Old Delhi and have lived there since then.

"This is all they rice we have," she said, showing her bowl that is meant to feed the couple and their four children. "These are dry pooris. If we don't get anything, we feed these pooris with water to the kids," she added.

Migrant workers like them are dependent entirely on food distributed by the government and non-government organisations. But many places run out of food before everybody gets their turn.

"I don't have a single rupee. I went to a nearby government school where they were distributing food and was chased away by the police," said Shankar Kumar, a 21-year-old labourer from Bihar who is in Old Delhi.

Also from Bihar is Ram Sagar, who walked 5 km to reach a school in Delhi's Majnu ka Tilla where the government is giving out food. He has six children and a wife and they all have to manage with a meagre helping of khichdi in a plastic bag.

Thirty-two-year-old Munni Devi from Bihar lives with her sister and her three children in an eight-by-eight room. Some salt and rice is all they have had to eat since the morning.

"We have nothing. When food is distributed, we stand in the queue. But it's all finished by the time our turn comes. The children are not getting milk," she said. Subhash Jha, a worker from Bihar, cooks whatever he manages to colllect by begging.

In posh New Friends Colony, 62-year-old Subhash Jha, a labourer from Bihar, collects twigs and branches to cook whatever he manages to get by begging. At night sleeps in a parked auto-rickshaw.

"What to do? We do not have a home. The roads are closed. We cannot go back home either," he said.

Similar reports come from several states across India where the poor and those living on daily incomes have been the hardest hit.

The country's 21-day lockdown is due to end on Tuesday but the government is widely expected to extend it until the end of the month with the number of coronavirus cases crossing 9,000 and the number of deaths passing 300.