During his recent visit to Delhi, where he joined a protest, "I asked them if they don't have the money or the Prime Minister has no heart to buy foodgrain", K Chandrashekar Rao said. 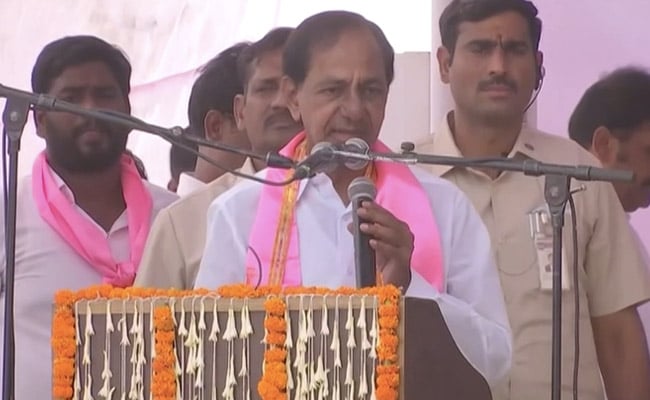 KCR claimed the BJP's philosophy is to have "strong Centre and weak states".

After setting the Centre a 24-hour deadline to procure foodgrain from Telangana's farmers, Chief Minister K Chandrashekar Rao today heaped insults on the Central government and accused the BJP of weakening the agriculture sector. This, he said, is a conspiracy to hand over the agriculture sector to corporates and reduce farmers to labourers. Mr Rao had set up a fresh face-off with the Centre and Prime Minister Narendra Modi with a dispute involving the purchase of rice from farmers in his state.

During his yesterday's sit-in protest in Delhi, "I asked them if they don't have the money or the Prime Minister has no heart to buy food grain," he said.

"I myself and my ministers went to Delhi to ask them to buy food grain. The Union minister insulted farmers, asked the people Telangana to eat broken rice... So much of arrogance that minister has," he said. The BJP's philosophy is to have strong Centre and weak states, "They want to financially weaken states, so we stand with begging bowl," he added.

"The Adani group was saved by setting aside Rs 12,000 crore but they are not ready to spend Rs 3000 crore to buy foodgrain from farmers... We wanted to expose their anti-farmer policies," Mr Rao said.

"The government protects those who have left banks bankrupt. Rs 10,000 crore have been spent to save corporate crooks in London... we have documents, we will expose them," he added.

Telangana is demanding "One nation-one procurement policy". The centre had contested Telangana's stand, with Union Food Minister Piyush Goyal recently saying the Telangana government has given in writing that it will not supply parboiled rice but raw rice to the Food Corporation of India.

Earlier today, the Chief Minister held a cabinet meeting to discuss the strategy to move forward. The cabinet has taken some key decisions, sources said.

Telangana, he added, will not leave the farmers "in the lurch". The cabinet has taken a decision to buy every grain grown by farmers. An expert committee has been constituted and ministers will go to districts. "In each village, procurement centres will be established," he added.

Declaring that the farmers – who held a year-long protest in Delhi against the farm laws -- are now planning a "mahasangram nationally", he said the Centre should admit "we can only communalise, we are not competent.