Rahul Gandhi also claimed to have blocked the passing of the Citizenship (Amendment) Bill, 2016 in the Rajya Sabha. 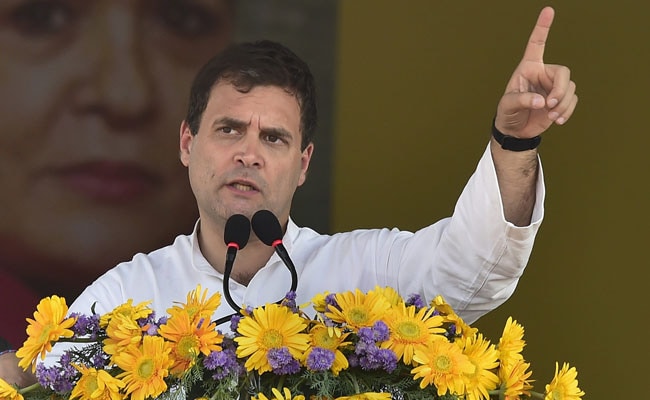 Congress President Rahul Gandhi on Wednesday said it is his party alone which can protect the culture, language and history of the people of the Northeast, and claimed to have blocked the passing of the Citizenship (Amendment) Bill, 2016 in the Rajya Sabha.

Launching a scathing attack on Prime Minister Narendra Modi, Mr Gandhi said he and his party would continue to oppose that bill as he reminded the people at the rally Manipur's Imphal that all PM Modi has done for the eight states in the region is rename Manmohan Singh's "Look East" policy as "Act East" policy.

Apart from the nomenclature there has been no progress, the Congress chief added.

He also slammed the Prime Minister for failing "to create the two crore jobs annually" that he had promised and flayed him for "instead destroying 30,000 jobs everyday over the past five years".

Mr Gandhi poked fun at PM Modi over his demonetisation move. "One fine morning, PM woke up and said I do not like the Rs 500 and Rs 1,000 currencies bills. These ought to be demonetised.

"Common people had to stand in the long serpentine queues in banks", but that did not matter to the ruling dispensation, he said.

About the Goods and Services Tax (GST), which Mr Gandhi calls the "Gabbar Singh Tax", he said it was introduced to benefit PM Modi's "wealthy friends while the small and medium traders were hit below the belt".

Appealing to the people to vote for the Congress and not the "RSS-BJP" nexus which is out to destroy the country, the Congress chief said "whenever PM Modi says something, he has a nasty plan and he always divides the people by spreading hatred."

Manipur goes to polls in the first two phases of the Lok Sabha elections.