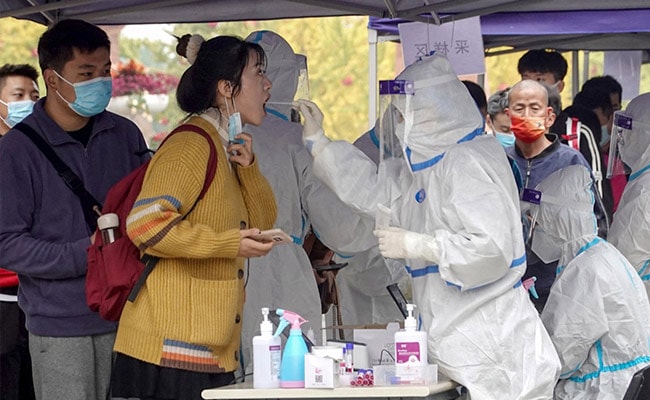 A retired Chinese couple who tested positive for COVID-19, days after they went on a travel spree across the country, has been blamed for the latest spike in cases in the country, raising questions about the efficacy of China's zero-covid policy.

China on Friday reported 32 coronavirus cases, including four positive cases in Beijing, the spurt in the capital city causing a sense of disquiet among officials ahead of the winter Olympics early next year.

Beijing has been reporting stray cases since Tuesday this week, ending the zero-case record for over two months.

Critics say despite periodic outbreaks of infections in different parts of the country posing huge logistic challenges, China has shown no signs of relaxing its costly zero-covid policy.

China's National Health Commission, which releases daily updates of cases, said in its latest report that 28 new locally transmitted COVID-19 cases were reported on Thursday in different parts of the country.

The current spike in cases was largely attributed to an elderly couple from Shanghai who flew to several cities, including the tourist city of Xian, tested positive for COVID-19, and sent officials on a leather hunt to trace scores of people who had come in contact with them.

Within three days of an announcement that the couple had tested positive in Xian on Saturday, hundreds of close contacts of the couple and their five travel companions, who later tested positive, were identified.

During this period, several cities had rolled out mass testing, a land port stopped operating and popular locations visited by the group were closed for disinfection, the Hong Kong-based South China Morning Post reported.

Details of the group''s domestic flights and hotels, stops at roast duck restaurants and noodle shops, was reported by the official media, with people being asked to report whether their movements overlapped with them.

Such cases causing periodic outbreaks presents considerable logistical and economic challenges to China despite administering vaccines to three quarters of its population.

The inevitability of further cases and a waning of vaccine antibody levels beg the question of how long China should persist with the zero-covid policy, the Post report said on Friday.

China, which unlike the rest of the world is seeking to pursue a zero case policy by stringently restricting foreign travel, faced increased criticism as the cases reported in smaller numbers continue to surface.

Wherever the cases prop up, officials immediately begin testing thousands of people around the area, besides banning flights and trains to prevent local people from travelling.

Beijing, where the foreign travel is strictly restricted with 21-day quarantine for foreigners, followed the stringent policy of zero cases as it gears up to host the prestigious Winter Olympics in February next year.

China has restricted travel from India and a number of other countries.

Despite numerous pleas, China has not permitted over 23,000 Indian students enrolled in Chinese colleges to return besides hundreds of Indians working in the country, stating that it is a preventive measure to contain the spread of the virus.