Nitish Kumar ended his alliance with the Bharatiya Janata Party-led (BJP) National Democratic Alliance and rejoined hands with RJD on a day of rapidly changing political developments in Bihar. 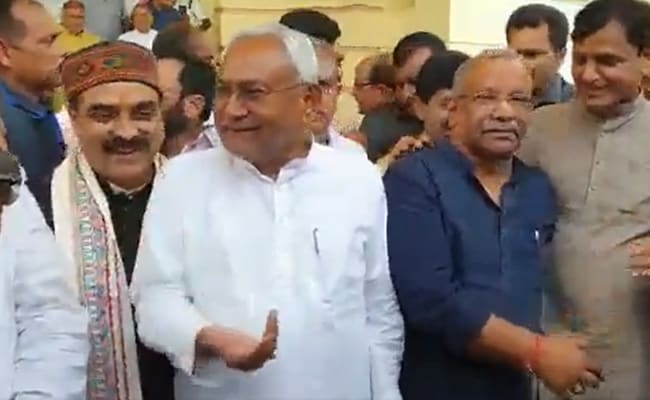 Union Minister Nityanand Rai on Wednesday, while addressing the speculations about Nitish Kumar's national ambitions after quitting the NDA, said that the JD(U) leader will "never be the Prime Minister" of the country, adding that post of the head of the government is "reserved" for PM Narendra Modi.

The remarks of the Union Minister came after speculations made rounds about Nitish Kumar seeing himself in a central role in the upcoming 2024 General elections.

Speaking to the reporters, Mr Rai said, "Going with RJD and Tejashwi Yadav is a betrayal to the people & mandate of Bihar, to the ideologies of Lohia-JP-George. Going with Congress-RJD proves that Nitish Kumar does everything just to be in power."

"The youth who had laid down their lives in the 1974 agitation (Bihar movement) from the entire country including Bihar, Nitish Kumar has betrayed their blood by tying up with Congress and RJD. His move has proved that he does everything only for power. What does it mean to compromise with 15-year-long terror and anarchy?" he said.

Stating that the people of the country have made up their minds and blessed Narendra Modi "to be the prime minister for lifetime", Mr Rai said that they (people) will not accept anybody else on the post.

"The people of not only Bihar but the entire country have made up their minds and blessed Narendra Modi to be the prime minister for lifetime. The people of this country will not accept anybody else as their PM if there is Narendra Modi. He will never be the Prime Minister. The post of PM is reserved for PM Modi because the poor got its massiha for the first time,' Mr Rai added.

Tarkishore Prasad, who was Nitish's Deputy in the NDA government from which Nitish Kumar walked out yesterday, said that the people of Bihar will give a "befitting reply" if a leader acts as per his "own personal ambitions".

"In 2017 Nitish Kumar said RJD trying to break JD(U). Yesterday, he said BJP trying to break his party. His decision to split from BJP was well-thought-out. If a leader acts as per his own personal ambitions, Bihar will give a befitting reply," Mr Prasad said.

BJP leader Shahnawaz Hussain said that Kumar joined hands with the ones who "insulted" him and left the ones who "gave him respect".

"He is going with the ones who insulted him and abused him, and leaving the ones who gave him respect. We worked with honesty and announced that we would contest the elections together. The rise of Nitish Kumar had happened against the RJD. It was his USP that he came forward against corruption," he said.

"We will play the role of a strong Opposition. We will put in efforts from now to win all 40 Lok Sabha seats in Bihar in the 2024 elections," Mr Hussain added.

Nitish Kumar ended his alliance with the Bharatiya Janata Party-led (BJP) National Democratic Alliance and rejoined hands with RJD on a day of rapidly changing political developments in Bihar.