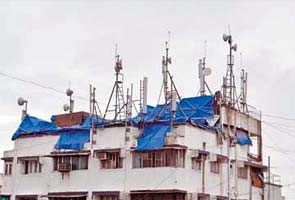 New Delhi: The Supreme Court today declined to get involved in setting up a body independent of the government to regulate radiation from cellphone towers.

It was hearing a Public Interest Litigation (PIL) that wants the court to direct the government to ban installation of cellphone towers in highly populated areas, protected natural areas and spaces where endangered species live as well as make environment impact assessments mandatory.

The court said it didn't want to interfere in the issue of setting up an independent body to regulate radiation. The government has already set up such a committee, but the petitioner argued that it needed to be outside government.

The court told the petitioner, "You have to give the executive and legislature a free hand at the initial stages. Later if they fail we can step in."

There have been several health concerns from cell phone tower radiation, raised by citizens and activists. Some state governments have also made it illegal to have the towers in thickly populated areas.

An environment ministry advisory earlier this year asked the Department of Telecommunication to not allow towers within one kilometer of each other. The ministry said it had found the towers to have a negative impact on the health of local wildlife, especially birds and bees.