DG Vanzara, out on bail in the alleged fake encounter case, said in his discharge application that PM Modi was secretly interrogated by the investigating officer of the case. 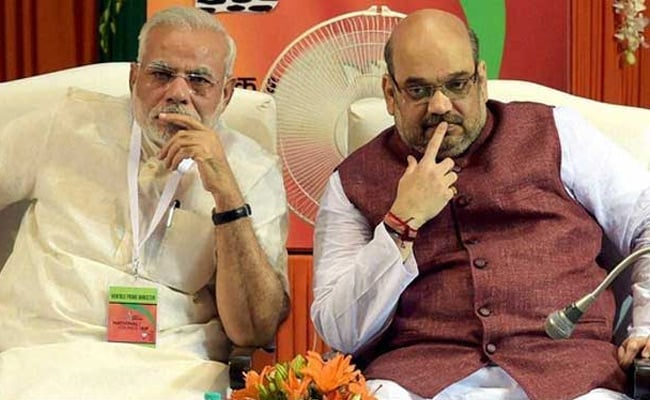 Narendra Modi, now the prime minister, was the chief minister of Gujarat during the time

Arguing for his client's discharge plea filed in the court of special judge J K Pandya, Mr Vanzara's lawyer V D Gajjar said going by the statements of witnesses recorded by the CBI, it appeared the "intention of the investigating agency was to implicate" Mr Modi and Amit Shah in the case.

"Fortunately" this did not happen, Mr Gajjar said.

Mr Modi, now the prime minister, was the chief minister of Gujarat during the time and Amit Shah served as Minister of State for Home under him.

The CBI had in 2014 given a clean chit to Mr Shah, now BJP president, citing insufficient evidence against him.

In his submission, Mr Gajjar said the charge sheet filed against his client was "concocted" and there was no prosecutable evidence against him.

He said statements of witnesses in the case were not reliable as accused like Bharat Patel and I K Chauhan, among others, were made witnesses without following due process.

The lawyer maintained the encounter was "genuine" and that the fake encounter story was "concocted".

Mr Vanzara, out on bail in the alleged fake encounter case, said in his discharge application that Mr Modi was secretly interrogated by the investigating officer of the case.

"However, such material was not placed on record of this case," the former IPS officer said.

Mr Vanzara, the former Deputy Inspector-General of Police, has presented this as one of the points to press for his discharge in the case.

The CBI has opposed his plea along with that of another former Gujarat Police officer N K Amin, a co-accused, who has also moved a discharge plea in the same court.

The central agency has claimed it has enough evidence to establish its charges against Mr Vanzara and Mr Amin.

The court, which has concluded hearing the plea of Mr Amin, a retired superintendent of police, fixed June 15 for further hearing of Mr Vanzara's petition.

Ishrat Jahan, a 19-year-old college girl from Mumbai, and three others -- Javed Shaikh alias Pranesh Pillai, Amjadali Akbarali Rana and Zeeshan Johar -- were killed in an encounter with the police on Ahmedabad's outskirts on June 15, 2004.

The Gujarat police had then claimed they had terror links and plotted to kill the then chief minister Mr Modi.

A Special Investigation Team (SIT), constituted by the Gujarat High Court, had concluded that it was a "fake" encounter. Following the finding, the High Court had transferred the case to the Central Bureau of Investigation (CBI).

In the first charge sheet filed by the CBI in 2013, seven Gujarat police officers were named as accused, including IPS officers P P Pandey, Mr Vanzara and G L Singhal. They faced charges of kidnapping, murder and criminal conspiracy.

Mr Pandey had been discharged in the case.

Promoted
Listen to the latest songs, only on JioSaavn.com
The CBI had named four IB officials, including special director Rajinder Kumar and officer M S Sinha, in the supplementary charge sheet. However, the Centre is yet to give its sanction for their prosecution.