The Congress has won all three assembly seats in Himachal Pradesh where bypolls were held on Saturday. It is also ahead in the crucial Lok Sabha seat of Mandi, won by the BJP with a margin of more than one lakh votes in 2019. 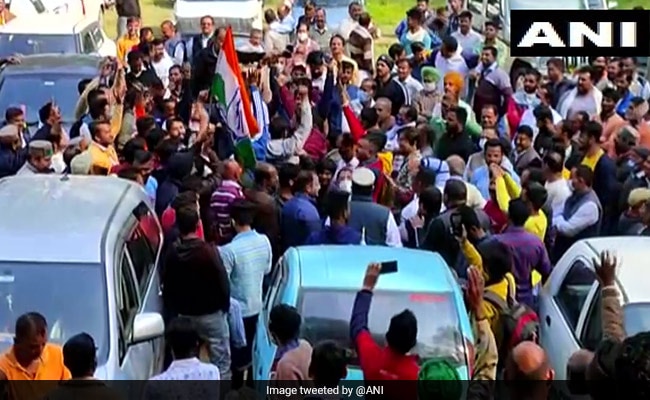 The BJP, which managed to keep its dominance over the northeast along with its allies, is heading for a huge setback in two northern states it rules -- Himachal Pradesh and Haryana. In Haryana, INLD'S Abhay Chautala has a comfortable lead, far ahead of the BJP's Gobind Kanda. In Himachal Pradesh -- where assembly elections are due next year -- Congress managed to scoop up all three assembly seats where bypolls were held on Saturday. It is also ahead in the crucial Lok Sabha seat of Mandi, won by the BJP with a margin of more than four lakh votes in 2019.

While the Congress has retained its grip on Fatehpur and Arki, the real gain was the state's apple heartland Jubbal-Kotkhai, which was held by the BJP. The seat fell to Congress after the BJP's last-minute move to withhold ticket from Chetan Singh Bragta, the son of sitting MLA Narinder Singh Bragta whose death made the election necessary.

The BJP fielded Neelam Saraik, who ran as an Independent candidate in 2017 against Narinder Bragta.

Upset, Chetan Singh Bragta contested as an Independent, dividing the anti-BJP votes and pushing the contest in favour of the Congress.  Congress candidate Rohit Thakur, who represented the constituency twice, had lost the last election by 1,060 votes. This time, the BJP candidate from Jubbal Kothkai lost her deposit.

For the Congress, the big prize, though, will be the Lok Sabha seat of Mandi, where the party had fielded Pratibha Singh, the wife of late Chief Minister Virbhadra Singh. She has been pitted against Kargil war hero Brigadier (Retd) Khushal Thakur, who has been fielded by the BJP.

The seat fell vacant after BJP MP Ram Swaroop Sharma's death -- allegedly by suicide -- in his official residence in New Delhi on March 17.

While the Congress victory in the three assembly seats is seen as the party's continuing influence in the state, the result in the Mandi seat -- home district of the Chief Minister jai Ram Thakur -- will determine his political future and that of Virbhadra Singh's family.

A defeat will mar the image of the Chief Minister, who has been personally involved in the campaign. Sources indicated that it may not, however, mean an instant dismissal as he is the party's tallest leader in the state.

Pratibha Singh had sought votes in the in the name of her late husband and a loss for her might translate to a huge setback for the state's premier political family. Mr Singh's son Vikramaditya Singh is a member of the state assembly from Shimla Rural.

Virbhadra Singh – the longest serving Chief Minister of the state – had been at the helm for six terms. One of the towering leaders of the state, he had also been elected to the Lok Sabha five times. His death vacated the Arki Lok Sabha seat, for which by-elections were held.