The Trinamool has called for a protest march at Kanthi tomorrow, and will hold a rival rally at the same venue as BJP on Sunday. 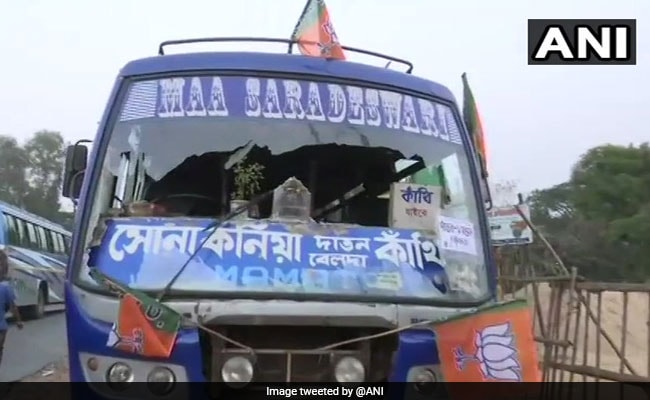 A bus was vandalised during violence after Amit Shah's speech in Kanthi, about 150 km from Kolkata.

Minutes after the end of Amit Shah's rally at Kanthi in West Bengal today, the town turned into a battlefield with buses being stoned, motorcycles set on fire and Trinamool Congress offices attacked. A petrol pump was also set on fire. A huge police force was deployed to try and bring the situation under control late in the evening.

The Trinamool and BJP are blaming each other for the violence. The Trinamool has called for a protest march at Kanthi tomorrow, and will hold a rival rally at the same venue as BJP on Sunday.

"The BJP will have to pay for this. If they throw bricks, do they expect rasagullas in return? Newton's law said that for every action, there will be a reaction," Trinamool leader Suvendu Adhikari said from Malda.

Traffic on a state highway was paralysed till late in the evening as reports of arson kept coming in from all along the way. Even police vehicles were not spared. While Trinamool claimed it was the handiwork of BJP supporters, the latter said they were still at the rally when they heard about their buses getting vandalised.

Trinamool leaders claimed that the chaos was preplanned, and BJP supporters armed with bricks and lathis had ransacked their own vehicles.

"There is no democracy here. The Trinamool will have to suffer the consequences for what happened here today," said BJP leader Sayantan Bose, who was at Kanthi. As many as 50 BJP supporters have been hospitalised, he added.

Kanthi in East Midnapore district is the stronghold of Suvendu Adhikari, minister for transport and environment in the Mamata Banerjee government. His father and brother are also parliamentarians from the district.  "A Trinamool office was set on fire. Motorcycles parked outside it were set on fire. Why would our people do any such thing?" he asked.

Traffic on the state highways leading in and out of the town was paralysed until reports last came in.