AAP councillors also alleged that they received threats, and offers of Rs 50 lakh to cross-vote in the Mayor election. 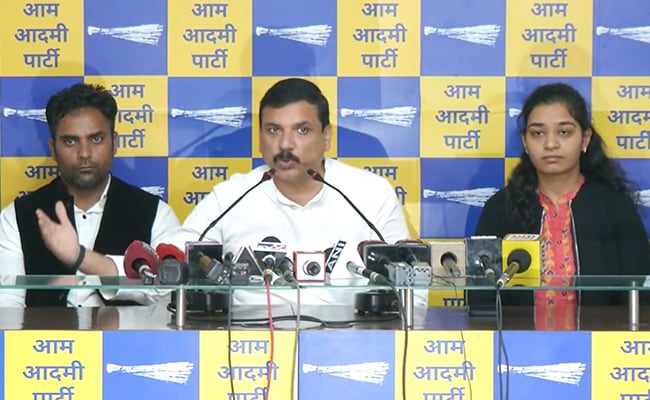 The BJP has come down to its "dirty games," the party alleged.

Aam Aadmi Party's today accused the Bharatiya Janata Party of trying to "buy" it's recently-elected councillors in the Municipal Corporation of Delhi (MCD). The BJP has come down to its "dirty games," the party alleged.

Accompanied by three AAP councillors -- Dr Ronakshi Sharma, Arun Nawariya, and Jyoti Rani -- senior AAP leader and Rajya Sabha member Sanjay Singh addressed the media, and said that despite getting 30 fewer seats in the recently concluded civic body polls in Delhi, and losing 80 seats as compared to the last elections, the BJP is down to "dirty games, just like the horse-trading of MLAs in Maharashtra, Arunachal Pradesh, Uttarakhand, Madhya Pradesh, Karnataka, Goa, and Gujarat"

They are applying the same "formula" of buying elected representatives in Delhi, Mr Singh added, while appealing to the Delhi Police Commissioner to arrest and jail those who are "trying to murder democracy and insult the people's mandate" through threats and money.

"BJP is such a shameless party, that it says the Mayor will be theirs, even after getting 30 fewer seats than us," Sanjay Singh said.

A man named Yogendra Chandolia called up Ms Sharma and said the BJP's state president Adesh Kumar Gupta would like to talk to her, Mr Singh claimed, adding that Mr Gupta and BJP workers mentioned a budget of Rs 100 crore for buying MCD councillors.

"This Rs 100 crore was to buy just 10 councillors. The Bharatiya Khokha Party (AAP's jibe at BJP for alleged horse-trading) has a budget of Rs 10 crore for each councillor," he said.

Mr Nawariya said those who supported him and were seen with him were targeted and abused. "They went to their houses and hurled filthy abuses," he said, adding that they are threatening his supporters of dire consequences. "About me, they have clearly said they would kill me before I take the oath," he added.

Jyoti Rani's husband said a man pulled him aside on the road, and said he had an offer for us. "He told me they would give us Rs 50 lakh to cross-vote," he said, adding that when he rejected the offer, the man persisted saying one can cross-vote without anyone knowing.

"These are AAP councillors, they will stand with Arvind Kejriwal with honesty and devotion. Our councillors will keep exposing all their tricks," Mr Singh said.

Earlier, the BJP had accused the Aam Aadmi Party of trying to lure the councillors of BJP.

"After cash for ticket, AAP is trying cash for councillor," the BJP had said.

Arvind Kejriwal's agents are roaming the streets of Delhi to lure councillors, the BJP had claimed.

The AAP on Wednesday dismantled the BJP in the Municipal Corporation of Delhi (MCD) polls by winning 134 wards, ending the 15-year rule of the BJP in the prestigious municipal corporation and reducing the Congress to just nine seats in a House of 250.