Cellphone videos of her little son playing with a sheet that covered her body left on the platform, was widely circulated and evoked anger over the authorities' indifference at the plight faced by migrants. 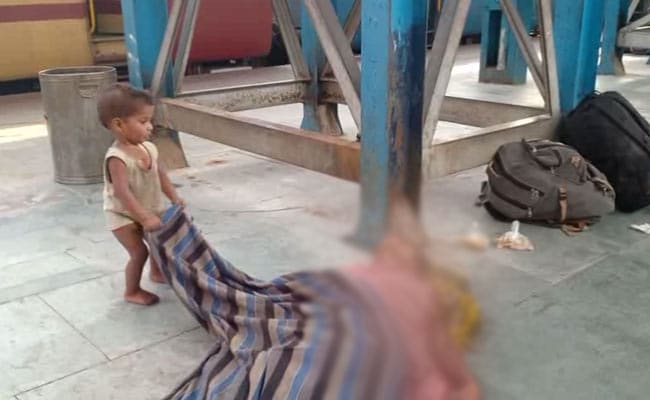 A day after the video of a child trying to remove the shroud from his mother's dead body pulled the heartstrings of a nation, her family members contradicted claims that she was suffering from mental illness.

"My daughter was not suffering from any disease and we are hurt (at the allegation)," said Mohammad Nehrul, sitting in his ancestral house in Srikol village, 60 km from Katihar, where people thronged on Thursday to help the family.

Arbeena, 27, had died while on way to Bihar from Gujarat's Ahmedabad. She was feeling unwell due to the heat and the last of food and water. On Monday, shortly before the train rolled into Muzaffarpur, she collapsed.

Cellphone videos of her little son playing with a sheet that covered her body left on the platform, was widely circulated and evoked anger over the authorities' indifference at the plight faced by migrants.

Aam Aadmi Party's Sanjay Singh tweeted the video, commenting, "Piyush Goyal is India's most disappointing, insensitive and failed Rail Minister. Can the BJP not see the pain of this innocent? People are dying from hunger and thirst. Trains are reaching their destinations in 9 days instead of 2 days and the rail minister is busy playing a blame-game".

Highlighting the tweet, the Railways issued a rejoinder. The Hindi tweet from the handle of the Railway spokesperson read: "The family of the above woman had earlier confirmed that she was already unwell. She had boarded a train from Ahmedabad on May 23 for her village in Katihar. On May 25, after her death, the family had disembarked her body at the Muzaffarpur station. Request you to not spread false news".

The woman's father, who is also a daily wage earner, told NDTV that Abeena could go to Ahmedabad and work as she was mentally and physically sound. Her sister's husband, he said, had got her the job there.

Now there is no one to take care of Arbeena's two children – four-year-old Farman and Rahmat, who is just a year old. The boys' father, Mohammad Nehrul said, had left the family a year ago.

Since the video surfaced, help has been pouring in for the family.

Lakhs of migrant workers and their families found themselves without income or a roof over their head as the countrywide shutdown was announced in March. Many set out on foot for villages thousands of kilometres away.

Earlier this month, the government started special trains to take migrants home, but the process has been vexed by paperwork and glitches. On trains, the people have faced hunger, thirst and heat. There have been reports that several died.