Read inOther Languages
This Article is From Apr 12, 2020

The parents were made to run from one hospital to another, they alleged. 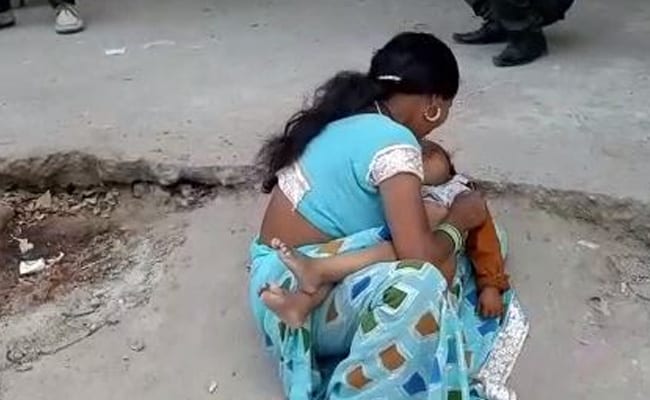 The heartbreaking clip showing woman with her son's body was widely shared on social media.

A woman in Bihar and her husband were forced to walk with the body of their three-year-old son after the state-run hospital in Jehanabad - about 48 km from state capital Patna- where the child died on Friday could not provide an ambulance. Accusing the administration of apathy, the parents said they could not ensure timely treatment of their child because no ambulances were available amid a nationwide lockdown over COVID-19. They were made to run from one hospital to another, they said.

In nearly one-minute long heartbreaking video, which has been widely shared on social media, the woman is seen crying helplessly. Her dead son is in her arms and her husband is standing close to her. As someone is heard offering help, the child's father says: "Now we don't need an ambulance."

According to the child's father, Girej Kumar, he fell ill two days back. He was having fever, cold and cough. "We were consulting local doctors in our village - Shahopar - initially but as his condition worsened, we had to hire a tempo to bring him to a hospital in Jehanabad because we could not get an ambulance due to lockdown," he said.

"The doctors at Sadar Hospital in Jehanabad referred us to Patna Medical College and Hospital (PMCH) but did not arrange an ambulance for us. It was because of this negligence that we lost our child," said the toddler's father.

"We did not get proper means of transport when it was a matter of life and death because of the lockdown," he added. After the death of his son, the man and his wife reached home with the help of some locals.

The clip has triggered strong responses on social media as people questioned lack of proper healthcare facilities in the state.. "Amid lockdown, a mother carried her child's dead body and walked miles in the absence of ambulance. Heart wrenching scene from Bihar," wrote a user.

"Heartbreaking. A Child dies in Lap of mother in Bihar as she treks from place to place to find a hospital that will admit him (sic)," another user wrote.

"This video made me very nervous. Mother mourning her child's body in harsh sunlight where child died due to lack of ambulance in lock down. The child was first referred from Arwal to Jehanabad, then from Jehanabad to Patna. This is the health system of Bihar," one of the posts read.

The district administration has suspended a manager at the state-run Sadar hospital and some doctors have been given a show-cause notice. "Ambulance has to be provided without any delay to the patients. We are trying to find how this happened," Naveen Kumar, District Magistrate, Jehanabad told reporters.